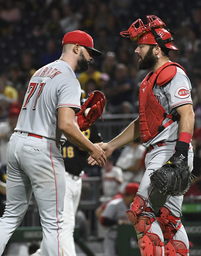 Fraley's sixth homer of the season landed in the Allegheny River and increased the Reds' lead to 5-0. The blast was measured at 443 feet.

"It's as good as you think it feels," Fraley said with a smile about hitting a ball that far. "It's awesome."

Dunn (1-1) allowed one run in five innings in his third start since being called up from Triple-A Louisville. It was his first win since April 15, 2021, when he was pitching for Seattle and beat Baltimore in the second game of a doubleheader. In his prior two starts, Dunn had been tagged for eight runs in 12 innings. He gave up three hits this time while walking four and striking out four.

The Reds acquired Dunn from the Mariners in a trade during spring training.

"It's amazing," Dunn said. "It feels good to finally to contribute to a win with this team. It's a big weight off my shoulders. I'm excited to get it rolling from here. Hopefully, it's the first of many more."

Dunn won despite not having great command of his pitches.

Austin Romine added a two-run double for the Reds, who had lost eight of their previous 10 games. Kyle Farmer, Mike Moustakas and Donovan Solano had two hits each.

The Pirates' Rodolfo Castro had two hits, including a solo home run in the fourth inning. The Pirates lost for the seventh time in nine games.

Tyler Beede (1-3) was tagged for five runs, four earned, in four innings. He also gave up six hits and a walk to go with two strikeouts.

Beede is 0-2 with an 8.25 ERA in four games since being moved from the bullpen to the rotation.

The Reds opened the scoring with an unearned run in the third inning on a two-out throwing error by shortstop Oneil Cruz.

A four-run fourth broke the game open. Austin Romine hit a two-run double before Fraley followed with a 443-foot shot that cleared the right field stands and bounced into the river.

"I was battling my butt off against Beede in the first two at-bats and he was pitching well," Fraley said. "I finally got a pitch I could do something with and didn't miss it."

Fraley became the 44th player to hit a ball into the river since PNC Park opened in 2001.

Castro hit his home run in the bottom of the fourth, a drive that cleared the 410-foot mark in left-center.

The Reds reinstated Solano from the restricted list and reliever Buck Farmer from the paternity list. Left fielder Albert Almora Jr. was placed on the 10-day injured list with a right shoulder contusion and right-hander T.J. Zeuch was optioned to Louisville.

Righty Luis Cessa, who has made only one start among 37 appearances this season, will take Zeuch's spot in the rotation. Cessa will pitch Monday at Philadelphia and manager David Bell said he will remain in the rotation through the end of the season.

Reds: RHP Hunter Greene (strained right shoulder) will throw a bullpen Sunday then likely begin a rehab assignment next week. . Almora was injured Friday while making a diving catch in Cincinnati's loss to the Pirates.

Pirates: 3B Ke'Bryan Hayes (back spasms) had a full workout prior to the game for the first time since going on the injured list. The Pirates are confident Hayes will be ready to be activated Monday, the first day he is eligible. . RHP Nick Mears (arthroscopic right elbow surgery) was activated from the 60-day IL and optioned to Triple-A Indianapolis.