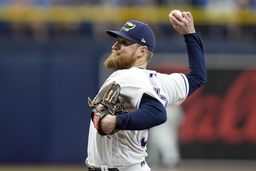 Rasmussen, who lost his perfect game last Sunday when Baltimore's Jorge Mateo opened the ninth with a double, walked MJ Melendez leading off the Royals first.

Melendez got the Royals' first hit when he lined a single into center past Rasmussen with one out in the sixth. Bobby Witt Jr. doubled before Ramussen's final batter, Salvador Perez, hit a sacrifice fly.

"He's been on an incredible run," Rays manager Kevin Cash said. "Today his stuff was maybe a tick better than what we saw against Baltimore. He did it a tremendous job."

Rasmussen (8-4) gave up two runs, two hits and one walk along with eight strikeouts in 5 2/3 innings.

"Professionally, for sure," Rasmussen said when asked if he's in best groove ever. "The last couple of outings I've done really well. It's the same thing we preach everytime, you've got to get ahead of hitters and then work to put them away."

Brooks Raley replaced Rasmussen and allowed an RBI single to Vinnie Pasquantino that got the Royals within 4-2.

After Pasquantino reached on an error by third baseman Isaac Paredes with one out in the first, Rasmussen retired 14 in a row.

"He was good," Royals manager Mike Matheny said. "Just such a good mix of the cutter-slider and you could tell guys just couldn't pick it up. It was coming out of his hand just like a fastball."

Peter Fairbanks, the third Tampa Bay reliever, worked the ninth to get his third save and complete a four-hitter.

The Rays, who hold the third and final AL wild card spot, have won six of eight.

Six of the first eight Rays' batters had hits off Kris Bubic (2-8), who allowed four runs, eight hits and two walks over 3 ? innings.

"His fastball command, just couldn't find it early on, especially driving it in on right-hander's," Matheny said. "He did a nice job of trying to survive and keep us in there."

Two of the hits came in the first when strong defensive plays by Witt at third and center fielder Michael A. Taylor helped keep the game scoreless.

Tampa Bay went up 3-0 in the second as the initial four batters' had hits, including an RBI single by Yu Chang and Taylor Walls' run-scoring double. The other run crossed the plate on a wild pitch.

Yandy Diaz made it 4-0 with a fourth-inning RBI double.

Kansas City has dropped five of six and have been held to six hits or fewer a team record-tying five consecutive games.

There was a loud cheer from the crowd when the stadium playing field lights went out for a second in the seventh with a thunderstorm rumbling overhead.

The Rays host a four-game series against the Los Angeles Angels starting Monday night and currently are not slated to face Shohei Ohtani as a pitcher. Ohtani (10-7), who has not pitched at Tropicana Field, is scheduled to start Sunday at Detroit but there is a chance of rain.