Cardinals' Goldschmidt has 2 HR, 5 RBIs in 8-3 win over Cubs 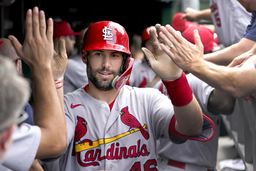 CHICAGO (AP) Paul Goldschmidt slugged his 32nd and 33rd homers to highlight a five-RBI performance and position himself in the Triple Crown discussion, helping the St. Louis Cardinals roll to an 8-3 win Thursday over the Chicago Cubs.

Goldschmidt increased his NL-leading RBI total to 105 and also leads the NL in batting average (.339). He is second to Kyle Schwarber of the Phillies (35) in home runs, and Thursday was the the third time this season Goldschmidt had a multi-homer game and the 23rd time in his career.

"If something like that (the Triple Crown) happened, it would be a miracle," Goldschmidt said. "So to think that's realistic is probably pretty far-fetched. It would be amazing, but to think that's a goal for anyone is a crazy standard."

Goldschmidt, Corey Dickerson and Tommy Edman collected three hits apiece as the NL Central-leading Cardinals won for the 10th time in their last 12 games and concluded a 6-2 trip.

Dickerson set an expansion-era franchise record for consecutive hits - 10 in 10 consecutive plate appearances. He sparked a three-run first inning with an RBI single for his ninth consecutive hit, breaking the previous mark of eight held by Curt Flood (1964, 1968), Felix Jose (1991) and Fernando Tatis (1998).

The Cardinals collected 16 hits even without slugger Nolan Arenado, who returned to St. Louis to attend the birth of his first child. But that was plenty of support for Dakota Hudson (7-6), who pitched a season-high seven innings of five-hit ball.

The Cubs lost for the fourth time in six games. Starter Marcus Stroman (3-6) gave up 11 hits and five runs, all earned, in five innings. It was one more hit than he'd surrendered against them on June 3.

"It looked like it just took (Stroman) a minute to get going, and I don't think he found that rhythm out of the stretch," Cubs manager David Ross said. "He was in (the stretch) a lot. They were jumping on him early in the count sometimes."

Nolan Gorman followed Dickerson's first-inning hit with an RBI single, and Tyler O'Neill capped it with a sacrifice fly.

Goldschmidt hit a two-run single in the fourth off Stroman, then smacked a solo shot that landed near the top of the left-field bleachers off Sean Newcomb in the sixth and had a two-run shot in the eighth off Kervin Castro.

Cubs left fielder Ian Happ provided the bulk of the Cubs' offense, hitting a double and scoring on a throwing error by Edman in the second, and following that with an RBI single in the third. Happ also hit a double that eluded right fielder Lars Nootbaar to score Nico Hoerner in the eighth.

Neither Albert Pujols nor Yadier Molina were in the lineup in their final visit to Wrigley Field.

Pujols, 42, an 11-time All-Star who ranks fifth all-time with 693 career home runs, and nine-time Gold Glove winner Molina, 40, were presented with Wrigley scoreboard panels with their numbers in a pregame ceremony.

"This guy has beat up on this club for a lot of years, and I wanted him to taste it one more time," Cardinals manager Oliver Marmol said of his failed attempt to give Pujols a pinch-hitting appearance in the ninth inning.

The Cubs expect three to four players won't travel to Toronto for a three-game series starting Monday, Cubs' President of Business Operations Jed Hoyer said. The names of the players will be disclosed Sunday in Milwaukee.

Canada's government states that all visitors must be vaccinated against COVID-19 in order to enter the country.

"You want to play at full strength all the time, but we have to make certain decisions in order to make sure we're able to fill out a roster and be competitive up there," Hoyer said. "It's not something we look forward to. It's not idea. But it's also baseball in 2022 when you go to Toronto."