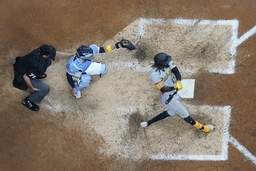 The Pittsburgh Pirates' rookie shortstop was at it again Tuesday night, going 2 for 4 with two RBIs and scoring the go-ahead run in a 4-2 victory. He also ended the game with a strong throw from second to complete a double play that thwarted Milwaukee's ninth-inning comeback attempt.

"I can't really point exactly to why I'm having so much success against this team and their pitching staff," Cruz said through a translator. "I do know that I've got to give credit to just my hard work, how hard I work and just the homework that I'm doing on these pitchers."

The Pirates have won eight of their last 12 meetings with the Brewers after losing each of their first six matchups this season. Cruz's midseason promotion to Pittsburgh - which came after those first six games - helps explain the reversal of fortune.

Cruz hit an RBI single in the third inning and a run-scoring double in the ninth. He also broke a 2-all tie in the eighth when he scored from third as Rodolfo Castro drew a bases-loaded walk from Brad Boxberger (3-3).

"Clearly, we've got to figure something out because we're not doing a good enough job (against Cruz)," Brewers manager Craig Counsell said. "I don't think there's any question about that. We all know he's a talented player, but we've got to do better."

The Brewers opened the ninth inning with Wong's double and Keston Hiura's single to put runners at the corners, but Andrew McCutchen popped to shortstop and then Luis Urias hit a grounder to Castro at second.

Castro went to his left and then turned his body around to make the throw to second. Cruz then fired a fastball to first to retire Urias.

"I was just hoping (Castro) would get to it," Pirates manager Derek Shelton said. "And then once he got it in Oneil's hands, we've talked a lot about his arm, and we saw it. That was a hell of a turn."

Chase De Jong got the final two outs in the eighth and worked the ninth to earn his first career save.

"To have the faith from them to go in there and handle that situation with a winning score on the board against a division rival, it makes me feel pretty good," De Jong said.

The Pirates' patience paid off in the eighth as they snapped a 2-all tie. Boxberger walked Castro on four pitches and issued three free passes in the inning.

Cruz walked with one out and advanced to second on Bryan Reynolds' single. Boxberger retired Ke'Bryan Hayes before issuing consecutive walks to Ben Gamel and Castro.

The Brewers' only runs came in the fourth on Wong's two-run blast. Wong sent a 2-2 curveball from Mitch Keller just over the right-field wall for his 11th homer of the season and third in the last four games.

Wong was batting fourth in the lineup, the first time in his 10-year career he started in the cleanup spot.

Pittsburgh tied the game in the seventh on Chavis' two-out solo shot to left against reliever Matt Bush.

Wong's homer was one of the only mistakes Keller made. Keller had a career-high 10 strikeouts and gave up two runs, four hits and two walks in six innings.

"Everything was pretty much on tonight," he said.

Brewers 1B Rowdy Tellez was out of the lineup after leaving Monday's game with a sore right knee, but he was on deck when the game ended.

The Pirates and Brewers meet for the final time this season Wednesday afternoon. Freddy Peralta (4-3, 3.69 ERA) will pitch for Milwaukee against Zach Thompson (3-10, 5.33).