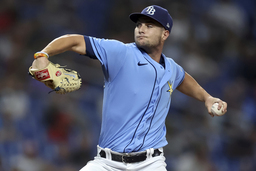 MIAMI (AP) Jose Siri homered, doubled and drove in two runs as the Tampa Bay Rays beat the Miami Marlins 7-2 on Tuesday night after All-Star pitcher Shane McClanahan was scratched due to injury.

The Rays, who lead the AL wild-card race, replaced McClanahan just before his scheduled start because of a left shoulder impingement. The left-hander, a contender for the AL Cy Young Award, is 11-5 with a 2.20 ERA. He started the All-Star Game for the American League last month at Dodger Stadium.

"Going into the game, something just didn't feel right," McClanahan said. "Just couldn't get loose. Can't put a finger on it."

McClanahan will undergo additional tests but is optimistic he won't be out long.

"Didn't want to take the risk of jeopardizing the big picture for one or two starts," McClanahan said. "We're actually pretty optimistic about it. Don't think it's anything major."

Acquired from Houston in an Aug. 1 trade, Siri also singled, scored three runs and made a leaping catch at the wall in center field to rob Jon Berti of an extra-base hit in the sixth inning.

"It was an impressive day," Siri said. "Thank God we made good contact and played good defense as well."

Randy Arozarena had three hits, including his 18th homer, and Yandy Diaz doubled twice for the Rays, who have won 13 of 17.

"It's just another thing about this team," Armstrong said. "We stepped up as a whole, as a bullpen today. We got the W and that's what matters."

Plate umpire Jim Reynolds left after being struck near his chin by a foul ball off the bat of Miami's Miguel Rojas in the eighth. Although alert, Reynolds slumped to the ground and immediately was tended to by athletic trainers. He will be evaluated per Major League Baseball concussion protocols.

The remainder of the game was played with three umpires. Second base ump Shane Livensparger replaced Reynolds behind the plate.

Consecutive RBI doubles from Siri and Diaz against Marlins starter Jesus Luzardo in the third put the Rays ahead 2-0.

Siri hit his fifth homer off reliever Cole Sulser leading off the seventh.

"We've got a lot of confidence in our bullpen whether the score opens up or not," Rays manager Kevin Cash said. "But our offense has been doing some pretty special things. It was good to see it continued, especially after an off day."

The Marlins narrowed the deficit on Jerar Encarnacion's two-run double in the seventh before Arozarena's solo homer in the ninth.

"It's a little different," Marlins manager Don Mattingly said of Tampa Bay's late switch in starters. "We set up for one and then your guys are just getting ready. They basically threw a lot of lefties at us all day long anyway, but definitely a first for me."

Luzardo (3-6) was lifted after six innings. The left-hander allowed five runs - three earned - and six hits. He walked two and struck out four.

Siri admitted thinking about his first career cycle before striking out in the eighth. He was also on deck in the ninth before Taylor Walls struck out to end the inning.

"I could say no but why would I lie?" Siri said. "It has happened to me twice, needed the triple. There is nothing you can do."

The Rays recalled RHP Ryan Yarbrough from Triple-A Durham. It is Yarbrough's fourth stint with the club this season. Yarbrough was optioned to Durham after allowing five runs and eight hits in 3 1/3 innings at Boston on Friday.

Rays RHP Drew Rasmussen (9-4, 2.77 ERA) starts the finale of the two-game series Wednesday. Miami had not announced a starter.