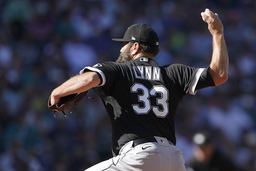 SEATTLE (AP) Even though Lance Lynn was overpowering, he had to give a little credit to his surroundings.

A sunny day and an unusual afternoon start time in Seattle played perfectly into Lynn's hands.

"The shadows were ugly early, so that helped the pitchers for sure," Lynn said. "I knew that they were going to have trouble seeing the ball so I just went and attacked, and it worked out well."

Lynn mowed through Seattle striking out a season-high 11, Elvis Andrus hit a two-run home run, and the Chicago White Sox snapped the Mariners' seven-game win streak with a 3-2 win on Monday.

Lynn retired the final 17 batters he faced in a dominant outing against a Seattle lineup that looked sleepy following a long Sunday in Cleveland and an early-morning arrival back in the Pacific Northwest.

The win kept the White Sox on the heels of Minnesota and Cleveland in a suddenly tight AL Central race, while Seattle lost ground to both Toronto and Tampa Bay in the chase for the top wild-card spot in the AL.

Chicago has won five of six.

"The first week when I was here it was tense - a lot of guys trying to make things happen," said Andrus, who signed with the White Sox on Aug. 19. "Lately we've been able to just let our talent go out there and compete."

Lynn (5-5) didn't allow a base runner after Abraham Toro's bloop RBI single in the second inning that right fielder Andrew Vaughn appeared to lose briefly in the sun. The 11 strikeouts were one off his career high, and he allowed just three hits.

Seattle's only run was unearned thanks to a passed ball and Lynn has allowed three earned runs total in his past four starts.

"When you have shadows, you're going to attack because and your cutter and sinker are going to work well. Anything that moves late," Lynn said.

The consecutive batters retired streak reached 19 until Julio Rodriguez singled off Kendall Graveman with two outs in the eighth. Liam Hendriks allowed two singles and a walk in the ninth, including J.P. Crawford's two-out single to score Mitch Haniger. But Hendriks struck out pinch-hitter Adam Frazier to finish off his 30th save.

"Our guys continue to compete, really every night. It's fun to watch," Seattle manager Scott Servais said. "Down by one, two, three, four runs, whatever, we are going to put pressure on other teams and make it tough to close it out."

Andrus' home run was one of two blemishes in an otherwise strong outing by Seattle starter Marco Gonzales. And it was very nearly an out rather than a homer.

Haniger made a leaping attempt and had the ball in his glove but lost it as he made contact with the padded wall. It was Andrus' 11th homer of the season and his fifth against Seattle having hit four earlier in the year with Oakland.

"I've been having really good at-bats here something that I haven't done in my whole career in Seattle," Andrus said. "So I think that's kind of made up for my first eight years that I didn't have good luck."

A.J. Pollock also hit a solo home run for the White Sox but otherwise the Mariners got the start it needed from Gonzales after using every bullpen arm in Cleveland on Sunday.

The White Sox activated 3B Yoan Moncada from the 10-day IL and reinstated LHP Aaron Bummer from the 60-day IL. Moncada had been out with a strained left hamstring. He was hitting .197 with seven homers and 40 RBIs in 80 games prior to the injury. Moncada is expected to be in the lineup on Tuesday.

Bummer has been out since early June due to a left lat strain. He appeared in three rehab games with Triple-A Charlotte before being reinstated. He was 0-1 with a 3.06 ERA in 20 games with Chicago prior to the injury.

White Sox: Chicago's starting pitcher for Wednesday is still listed as to be determined, but acting manager Miguel Cairo said there's a chance it could be RHP Michael Kopech. Kopech has been out since Aug. 23 with a left knee strain.

White Sox: RHP Johnny Cueto (7-6, 2.93) has won three of his past four decisions. Cueto threw 5 1/3 innings allowing six hits and one run in his last start against Kansas City.

Mariners: RHP Logan Gilbert (11-5, 3.35) threw six shutout innings allowing only two hits and striking out nine in his last start against Detroit. Gilbert picked up his first win since July 3 in the outing.