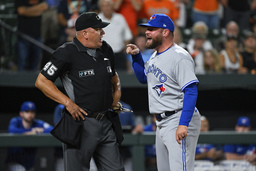 BALTIMORE (AP) Brandon Hyde managed like he was in an elimination game, and Baltimore held on for a big victory over Toronto.

In the process, this race between the Orioles and Blue Jays turned testy.

Adley Rutschman hit a bases-loaded double during a five-run third inning, and the Orioles rebounded with a 9-6 victory over Toronto on Tuesday night in a heated game in which both benches briefly emptied in the middle of the seventh.

The Orioles pulled within 3 1/2 games of Toronto for the last American League wild card. They were swept by the Blue Jays in a doubleheader Monday that opened this crucial series. The following night, Hyde used three of his top relievers - Dillon Tate (4-3), Cionel Perez and Felix Bautista - for a combined five innings.

"I thought we needed to win the game," Hyde said. "I was trying to do anything I can to try and win the game."

The Orioles trailed 3-0 before rallying to snap Toronto's five-game winning streak. Four Baltimore relievers combined to throw six innings, with Bautista getting the final six outs for his 12th save.

Bo Bichette homered again for Toronto - his fourth in the past two games - but Mitch White (0-4) couldn't make it out of a wild third inning in which he walked three and hit a batter.

In the seventh, former Blue Jay Bryan Baker came on for the Orioles and allowed a run that cut Baltimore's lead to 6-5. Then tempers flared when Baker appeared to make a "chirping" signal with his hand toward the Toronto dugout after striking out Matt Chapman for the third out. Benches and bullpens emptied, although order was quickly restored.

"I didn't understand why Bryan Baker was looking into our dugout after giving up a run on back-to-back days," Blue Jays interim manager John Schneider said.

The Orioles' offense broke through in the third. They loaded the bases with nobody out when White walked two and hit Cedric Mullins. Rutschman's two-run double made it 3-2, and then Anthony Santander tied it with an RBI groundout.

Ryan Mountcastle brought in a run with a single, and White was removed after another walk. Gunnar Henderson followed with an RBI single to make it 5-3.

Kyle Bradish, who was coming off consecutive scoreless starts against Houston and Cleveland, lasted only three-plus innings before Hyde went to his bullpen.

Tate came on with men on first and third and nobody out in the fourth. He escaped that jam but gave up an RBI double to Chapman in the fifth. Then Perez came in and went 1 1/3 scoreless innings.

Baltimore added a big run in the sixth when Jorge Mateo tripled with two out and Mullins drove him in with a single.

Baker allowed the first two Toronto hitters to reach base in the seventh, but with men on first and third, Teoscar Hernandez - who had homered off Baker in Monday's first game - bounced into a double play. A run scored on that play to make it 6-5, but it left the bases empty.

"When I hit the groundball, he's staring at me and saying, `Yeah, yeah,'" Hernandez said. "And then he strikes out Chapman. As soon as he strikes out, he turns into our dugout and starts talking and pointing at me, and saying that I was talking too much. But I wasn't talking. I wasn't saying anything."

Baker saw it differently, although he said he probably should have handled the situation better.

Schneider was ejected during the bottom of the inning - he said afterward he had questioned the strike zone - and came out to give plate umpire Jeff Nelson an earful.

Trevor Richards allowed a bases-loaded walk in the bottom of the eighth to put the Orioles back up by two, and then Mountcastle singled home two more runs. Left fielder Lourdes Gurriel's throw to the plate was in plenty of time to get Rutschman on that play, but the tag was a bit late and he was ruled safe on a review to make it 9-5.

Bichette had four hits, including a two-run homer in the third that made it 3-0. Chapman had an RBI single in the first.

The start of the game was delayed 17 minutes because of rain.

Schneider's ejection happened shortly after the bench-clearing incident, but it seemed like it was more related to balls and strikes. The Blue Jays have a history with Nelson, who ejected then-manager Charlie Montoyo from an April game after Montoyo took issue with his strike zone.

Orioles: Hyde said RHP Jordan Lyles was better but still feeling sick. Lyles was scratched from his start in the doubleheader Monday and is day to day. Baltimore does not have him listed among its probable starters through the weekend.

This series wraps up Wednesday night with Toronto's Alek Manoah (13-7) facing Baltimore's Dean Kremer (6-4). These teams still have seven games remaining against each other, including that one.