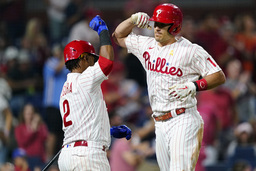 PHILADELPHIA (AP) Dalton Guthrie had the sweet spot of the baseball already tattooed with his name and first hit and RBI. The ball sat in a case in his locker and was soon headed back to Florida as a gift for his parents. Nick Nelson stashed the ball from his first save in the majors in his backpack.

The September souvenirs are a sweet reminder that Philadelphia's playoff push has been about more than just the stars that make up the bulk of the $230 million-plus payroll. But those reliable sluggers sure don't hurt, either.

Rhys Hoskins and J.T. Realmuto hit solo homers and Noah Syndergaard pitched well enough into the seventh inning to keep the Philadelphia Phillies in playoff position with a 5-3 victory over the Washington Nationals on Friday night.

"Hats off to player development, but also to the guys in the clubhouse to make these young guys feel comfortable and come in here and let them do the work," Phillies interim manager Rob Thomson said.

Phillies reliever Brand Hand failed to earn a save in the ninth when he put two runners on and was pulled for Nelson with two outs. Nelson retired .188 hitter Riley Adams on a grounder to earn his first save in 61 career relief outings.

The Phillies entered with a grip on the third wild-card spot and each win moves them closer to their first playoff berth since 2011. Bryce Harper got the night off, but even that was OK because the Phillies have Edmundo Sosa. Sosa tripled and scored in his first at-bat and singled in the fifth, bringing his streak of reaching base to 11 straight plate appearances over his last four starts. He had three singles, four doubles, one triple, two homers and one walk over that span.

Syndergaard (9-9) allowed eight hits and walked none over 86 pitches in six-plus innings. The plus in this instance was a homer to Alex Call to lead off the seventh that brought the Nationals to 4-3. Andrew Bellatti and Jose Alvarado each tossed a scoreless inning of relief.

Guthrie, who hit ninth and played right field, ripped a run-scoring single to right in the third for his first major league hit and RBI. He drove in Sosa, who reached third on a headfirst slide for a triple that continued his torrid pace.

"It's cool. It's a pretty comfortable environment when you come up here," Guthrie said. "These older guys make you feel at home. They make it seem like it's just baseball."

Like most teams this season, the Phillies continued to rough up Nationals starter Patrick Corbin (6-18). Hoskins, who cost the Phillies with a ninth-inning error a night earlier in a loss to the Marlins, hit his 27th homer of the season in the fourth. Alec Bohm nearly made it back-to-back but his deep drive knocked off the top of the right-field wall for a double. Realmuto drove him in for a 3-0 lead on a single up the middle.

Realmuto, drilled with a pitch in his left elbow in the eighth, hit his 16th homer of the season in the sixth for a 4-2 lead.

Philadelphia's bottom of the order was clutch again when Guthrie, who this week became the 81st former Florida Gator to play in the majors, made it 5-3 in the seventh with an RBI infield single.

Corbin, who had actually won his last two starts, gave up 12 hits and five runs in 6 2/3 innings.

Harper had the night off for the first time since he returned two weeks ago from the injured list with a broken left thumb. Harper was hitless in his last seven at-bats and 10 of his last 11.

"I think anybody that comes back from a short rehab stint kind of takes off and then plateaus. Maybe fatigue sets in or whatever," Thomson said. "So he might be going through a little bit of that."

First lady Jill Biden attended the game to mark Childhood Cancer Awareness Night. Biden joined children ages 4-15 from the Delaware Valley area receiving or who had received treatment for cancer. The kids were recognized on the field during pre-game ceremonies.

Nationals: C Keibert Ruiz was placed on the 10-day injured list with a testicular contusion and, quite understandably, his season might be over. Ruiz took one where it hurts most in Thursday's game - his plight even made TMZ - and stayed in St. Louis, though he was set to join his teammates in Philadelphia. Manager Dave Martinez said Ruiz was instructed to avoid strenuous activity for three weeks.

"He's matured behind the plate, he's gotten a lot better calling games, his hitting has gotten a lot better. He's going to be a big part of our future moving forward, and I truly believe that one of these years, this kid will be an All-Star," Martinez said.

Phillies: RHP Seranthony Dominguez (right triceps tendinitis) will be activated Sunday to bolster a creaky bullpen after he threw a scoreless inning in a minor league rehab stint on Thursday. RHP Zach Eflin (right knee) struck out three in two innings in a rehab start Friday for Triple-A Lehigh Valley.