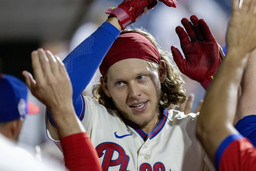 PHILADELPHIA (AP) Bryce Harper had posted on Instagram a photoshopped picture of him dressed in an Eagles baseball jersey and batting helmet with the caption "Go Birds."

Good news for Harper, he didn't have to miss the game.

Thanks to a franchise-worst rain delay, all the Phillies turned into NFL fans on the first weekend of the season.

"We got to be Eagles football fans for today, which is pretty cool," first baseman Rhys Hoskins said. "We don't get to do it on Sundays during the year."

The rain delay went long. Then the Phillies went deep - and moved closer toward joining the Eagles with meaningful games in October.

Alec Bohm hit the go-ahead, two-run homer in the seventh inning to lead the Philadelphia Phillies to a 7-5 win over the Washington Nationals on Sunday night in a game interrupted 3 hours, 36 minutes by rain.

Bohm raised his right arm and pointed toward the clear sky after his 11th homer of the season sailed into the right-field seats for a 7-5 lead. Hoskins hit a three-run homer for the Phillies and had four RBIs.

The delay came with the Phillies leading 1-0 through two innings and was the longest single in-game break in franchise history.

The Phillies wanted to get this one in with a day off Monday and a six-game road trip ahead with three-game stops at Miami and Atlanta. The Phillies kept their hold on the second NL wild-card spot with 22 games left and their first playoff appearance since 2011 well in sight.

"Shoot, what more could you ask for as a competitor? We'd like to be in, clinched already," Hoskins said. "But this is going to be as competitive as it gets and I know the whole group in here is pretty excited."

Kyle Finnegan (5-4) gave up Bohm's homer and took the loss. Jose Alvarado (4-2) tossed a scoreless inning and earned the win. David Robertson worked a scoreless ninth for his 19th save.

"I should say that I was working," he said, smiling, "but I was watching football."

The rain turned Citizens Bank Park into the envy of sports bars in the area once the Phillies put the Eagles game on the big screen, that is, the big, big screen. The Eagles' season-opening win at Detroit was broadcast on the 97-feet wide by 76-feet tall PhanaVision board in left field, as well as TVs around the park.

Phillies fans found shelter in the concourse, dry rows in the low-level sections and the ballpark sports pub to stay warm and whet their whistles with $15 beers. The hundreds of fans that stuck around cheered each big play and touchdown as the rain delay dragged on.

The Phillies bullpen - which got a boost before the game when Seranthony Dominguez was activated off the injured list -- instead trudged through a parade of relievers the rest of the game. The Nationals and Phillies each used six pitchers.

Luke Voit tied the game at 1 in the third with a double off Cristopher Sanchez. Sanchez gave up three RBI singles in the fourth that put the Nationals ahead 4-1.

The Nationals gave up the lead in the fifth when Hoskins lined a sinker off Erasmo Ramirez the opposite way into the right-field seats for a three-run homer. It was his 28th homer of the year and second of the series.

After Washington scored a run in the sixth, Hoskins again gave the Phillies a needed lift with a sacrifice fly that made it 5-5.

"We swung the bats well. We've got to keep our heads up, keep going," Nationals manager Dave Martinez said.

Nationals: INF Luis Garcia (right side) was not in the starting lineup because of soreness suffered during swings in a cage. LHP MacKenzie Gore (left elbow) made a rehab appearance for Triple-A Rochester.

Phillies: RHP Zack Wheeler (right forearm tendinitis) is expected to throw a bullpen session this week. RF Nick Castellanos (right oblique) will swing the bat on Tuesday. It's undecided if the slugger needs a rehab assignment.

The Nationals and Phillies are both off Monday.

The Nationals then zip home to play two games against the Orioles. RHP Cory Abbott (0-2, 4.22 ERA) takes the mound Tuesday for the Nationals and the Orioles have yet to name a starter.

The Phillies send LHP Bailey Falter (4-3, 4.02 ERA) to the mound Tuesday against Marlins RHP Sandy Alcantara (12-7, 2.43) in the start of a three-game series. Alcantara will make his sixth start against the Phillies this season.