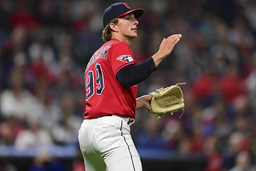 Trout went 0 for 3 with three routine flyballs and a walk. The three-time AL MVP was chasing the mark of eight straight games with a home run, set by Pittsburgh's Dale Long in 1956 and matched by Don Mattingly of the Yankees in 1987 and Seattle's Ken Griffey Jr. in 1993.

Trout admitted the streak had been on his mind.

"I'm not going to lie," he said. "I've been thinking about it, for sure. Everybody's been texting me. You guys are asking me a bunch of questions. It's kind of hard not to."

Trout said a home run was especially in his thoughts when he batted against hard-throwing James Karinchak in the eighth that resulted in a fly to right on a 2-1 pitch.

"It's the nature of things, I guess," he said. "When I think home run, not good as you saw. I chased some pitches and was amped up too much. Got to start a new streak, I guess."

Oscar Gonzalez's two-run homer in the sixth broke a 1-all tie and gave Cleveland its fifth straight win. Jose Ramirez started the inning with a double and Gonzalez lined an 0-2 pitch from Jose Suarez (6-7) off the railing atop the wall in left field.

Gonzalez, one of several rookies who have made a major contribution in Cleveland's surprising season, has eight home runs. Rookie Kirk McCarty (3-2) held Los Angeles to one hit in 3 2/3 innings for Cleveland, which has won seven of eight.

Emmanuel Clase gave up a two-out single in the ninth, but struck out Matt Duffy and converted his 35th save in 38 chances

Trout faced rookie Cody Morris in his first two at-bats. He flied out to center in the first and drew a four-pitch walk in the third with a runner on second.

Trout batted against McCarty, another rookie, in the fifth and flied out to center on a 3-2 pitch after the first three pitches were balls.

Trout was the first AL player with a seven-game home run streak since Kendrys Morales of Toronto in 2018. Cincinnati's Joey Votto homered in seven straight last season from July 24-30.

Matt Thaiss hit a leadoff homer in the second off Morris. Luke Maile's sacrifice fly tied the game in the fifth.

Angels third baseman Matt Duffy fielded Myles Straw's grounder in the fifth, but couldn't get the ball out of his glove after two attempts and the play went for a hit.

Steven Kwan followed with a slow roller that came to a stop halfway up the third base line for another infield hit. Plate umpire John Tumpane, bending over to get a closer look, gave the fair signal as Thaiss, whose only hope was for the ball to roll foul, looked on.

Angels infielder David Fletcher didn't start for the third day in a row because of a bruised right hand. Fletcher batted for Andrew Velazquez and bunted for a hit in the fifth. He also bunted for an out in the seventh.

Umpire Ron Kulpa, who had to leave Monday night's game with two outs in the ninth after being struck on the mask by a foul tip, wasn't part of Tuesday's crew. He was replaced by Alan Porter.

Kulpa ejected both managers in the seventh Monday. Francona asked for a review on whether Andres Gimenez was hit by a pitch. Francona was ejected after Kulpa said he didn't see him signal for a review and play had already continued.

Francona spoke with league officials Tuesday, but gave few details about the conversation.

"I don't know if it was meant to be public or not," he said. "But they reached out to me, and they were very professional and very good. I'll leave it at that."

"That was a good move on his part," Francona said. "I don't know what was said, but I do think anytime they talk, it's good."

The changes include implementation of a pitch clock, banning defensive shifts and an increase in the size of bases.

Angels: RHP Shohei Ohtani is on schedule to start Saturday against Seattle. He was removed because of a blister on his right index after five innings in his last start against Houston.

LHP Patrick Sandoval (5-9, 2.98 ERA) will start the series finale for the Angels on Wednesday afternoon. RHP Cal Quantrill (12-5, 3.50 ERA) will start for the Guardians. Quantrill is 12-0 in 40 career games at Progressive Field and has gone 32 straight home starts without a loss.