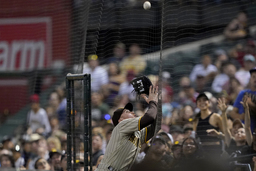 PHOENIX (AP) San Diego's blockbuster deal for Juan Soto and Josh Bell at the trade deadline garnered so much attention that the addition of Brandon Drury was barely noticed.

Turns out it was a pretty important acquisition.

Drury hit a pair of homers, Blake Snell threw a season-high seven innings and the Padres cruised to a 12-3 victory over the Arizona Diamondbacks on Friday night.

San Diego stayed 1 1/2 games ahead of the Milwaukee Brewers for the final NL wild card playoff spot. The Brewers rallied to beat the Yankees 7-6 earlier Friday.

It was a nice bounce-back win for the Padres, who looked listless in a 4-0 loss to the Diamondbacks on Thursday night. They had a team meeting before Friday's win as they try to stay ahead of the Brewers with less than three weeks to go in the season.

"This is an unbelievable baseball team here," Drury said. "I think sometimes we - I don't want to say take it for granted - but we've been a little lax little lately. Sometimes that's what you need, get the guys together, have a team meeting, get the guys going and remind us what we're here for - to win a World Series."

The Padres jumped out to a 2-0 lead in the first on Drury's two-run shot into the left field seats. He has a career-high 27 homers this season, including seven since being traded to San Diego from Cincinnati.

Drury pushed the lead to 4-0 in the fourth on a solo shot to left center, marking the 30-year-old's first multi-homer game since 2019. He recently returned to the lineup after missing nearly two weeks because of a concussion.

Snell (7-9) gave up one run on four hits and no walks while striking out seven. The 2018 AL Cy Young winner lowered his ERA to 3.85 for the season.

"I've been feeling stronger and stronger as the year's gone on," Snell said.

Once the Padres built their big lead, Arizona catcher Carson Kelly made his fourth pitching appearance of the season. He gave up one run over 1 1/3 innings.

It was another tough outing for Diamondbacks lefty Madison Bumgarner (6-15), who gave up five runs over five innings.

"It's a very frustrating game sometimes," Bumgarner said. "I've thrown much worse games this year and had far better results. It's tough to understand sometimes."

That's a far cry from his first 11 years with San Francisco, where he was a four-time All-Star and helped the team win three World Series titles.

Bumgarner had a decent start to the current season, giving the D-backs hope that they could salvage part of the deal. But he's regressed as the season's developed and he had a 9.23 ERA over five starts in August.

This month hasn't been much better with 11 earned runs in 16 innings.