Reds shut down Cardinals and Albert Pujols in 3-0 win 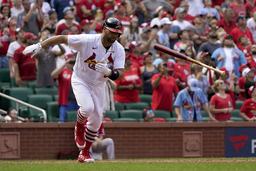 The 42-year-old Pujols, who entered the game with 698 home runs, went 0 for 4. He received a lengthy standing ovation from the sellout crowd in each of his plate appearances.

Pujols sits fourth on the all-time list behind Barry Bonds (762), Hank Aaron (755) and Babe Ruth (714). He has 19 home runs this season, and his last round-tripper came in a 6-5 win over the Reds on Friday. The Cardinals have 14 games remaining.

Cessa got Pujols to ground out and fly out in two chances against his childhood idol.

Fairchild hit his fifth home run of the season while making the second of rare back-to-back starts. He also enjoyed the crowd energy and theatre that occurred every time Pujols came to the plate.

"It's great to be able to play on the same field with a guy who is making history," Fairchild said. "Being able to witness that is pretty cool."

"I don't think we panicked at all," said St. Louis infielder Paul DeJong, who had one of the Cardinals' two hits. "We've just got to take good at-bats and win the situation."

The Cardinals hold an eight-game lead over Milwaukee in the NL Central.

Fairchild hit a two-run homer in the sixth off Jordan Montgomery, who allowed three runs on seven hits over 5 1/3 innings. Montgomery (8-5) struck out nine and walked two.

Buck Farmer recorded his second save in three opportunities, and induced Pujols to pop out to start the ninth inning.

Spencer Steer added a run-scoring hit for the Reds, who had lost nine of their previous 10 games,

Cincinnati did not allow an earned run over the final 24 2/3 innings of the five games series and won two games in the set.

The Cardinals rested regulars Paul Goldschmidt and Tommy Edman before heading out on a 10-day, eight game road trip.

The Reds have used a franchise record 65 players this season, the most in majors. The previous team mark of 57 was set in 2003.

Cardinals: RHP Jordan Hicks was placed on the 15-day injury list with fatigue and neck spasms. Hicks has allowed three runs in 3 2/3 innings over his last three appearances.

Cardinals: RHP Adam Wainwright (11-9, 3.29) will open a three-game series at San Diego on Tuesday. Wainwright and battery mate Yadier Molina set an all-time record of 325 starts together on Wednesday.