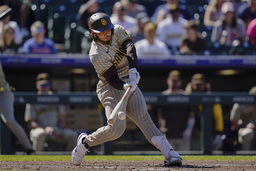 Jake Cronenworth tripled and drove in three runs and Juan Soto, Jurickson Profar and Luis Campusano had two hits each for the Padres. Robert Suarez (5-1) pitched one inning of relief for the win.

"It's crunch time," Drury said. "Every game from here on out is a must win. We're focused on what we have to do to win but we know what's going on, too. As long as we take care of what we've got to take care of we trust we're going to be where we want to be."

The Rockies finished 41-40 at Coors Field and end the season on the road where they are 24-48.

The Padres scored three runs in the first inning and four more in the third on Cronenworth's two-run triple and a 433-foot two-run homer by Myers that made it 7-1.

Colorado chipped away at the lead, getting a homer from McMahon leading off its half of the third, his 19th, two more on a single by Bouchard in the fourth and Charlie Blackmon's RBI single in the fifth.

Machado's homer, a three-run shot off Alex Colome, gave him 31 for the season and 100 RBIs. It is the second straight year and third time he has driven in 100 runs or more.

"Obviously it's a huge number," Machado said. "Whenever you put up those numbers it's a team thing. Us having this good year, just got to continue it. It's always a good accomplishment."

Drury followed with his 28th and Austin Nola had an RBI double later in the inning.

"It's huge to score runs here because we certainly have the ability to," manager Bob Melvin said. "To put up a five-spot a four-spot and a three-spot, we'll take that anywhere. Kind of get that monkey off our back here and win a series and score some runs feels pretty good."

NOT JUST A BIG BAT

Machado provided a defensive highlight in the bottom of the fourth to go with his big offensive day. With runners on first and second and one out, Ezequiel Tovar hit a sharp grounder down the line at third. Machado snagged it and fired sidearm to first in one motion to get the out.

"Game's easy for him," Drury said. "He's so good that the game's just a little bit easier for him than most people. That goes for hitting and defense. This is not an easy game."

Machado attributed his defense to practice and understanding the situation.