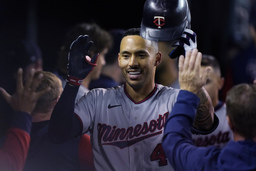 Detroit had its six-game winning streak snapped and surpassed the 1973 New York Yankees and 1976 Chicago White Sox, whose 21 times shut out were the most in the American League in the DH era.

"We've obviously seen a lot of that this year," Tigers manager A.J. Hinch said. "We never were able to get the big hit we needed."

Ryan (13-8) walked one and struck out eight. He fanned Miguel Cabrera and Spencer Torkelson to start the second, tying and breaking Francisco Liriano's franchise record of 144 strikeouts for a rookie pitcher.

"That's a really cool moment," Ryan said. "I'm very, very honored to just be on the same list as pitchers like Francisco Liriano and Bert Blyleven. I got the ball from Rocco (Baldelli) in the clubhouse after the game, and (Caleb) Thielbar told me saw Liriano get the record, so that was cool."

"I've had enough of Joe Ryan," Hinch said. "That guy's really good. He does a lot to disrupt your timing and he throws just enough strikes to keep you on the defensive."

"He got himself into him a lot of counts that worked against him," Hinch said. "The walks mean you are facing the toughest part of the lineup more often."

The Twins took a 1-0 lead in the third on Mark Contreras' RBI double and added two more runs in the fourth. Gio Urshela walked and scored on Ryan Jeffers' triple, and Jake Cave made it 3-0 with a two-out single.

"Before this season, Joe has competed mostly with his fastball, because it is good enough for him to do that," Baldelli said. "But now he's got more pitches, not just that he can mix in, but that he can rely on in key spots. That's been his biggest step forward this year, and we'll be watching to make sure he keeps it going next season."

Carlos Correa hit a two-run homer off Will Vest in the seventh, giving the Twins a 5-0 lead, and Gilberto Celestino added an RBI double later in the inning.

"I've just been trying to stay aggressive," he said. "I know A.J. Hinch, and I knew he'd want his pitcher to start me out with a fastball inside, so I was ready for it."

Urshela made it 7-0 in the eighth before Kody Clemens threw a scoreless ninth in his seventh pitching appearance of the season. Clemens, the son of seven-time Cy Young winner Roger Clemens, didn't pitch in college and the minors before reaching the majors earlier this season, but has replaced Harold Castro as Detroit's go-to emergency reliever.

"He had a velocity range of 46 to 77 and put up a zero when we didn't have many," Hinch said. "We might have to start calling him a position player and pitcher."

The game was Miguel Cabrera's 999th at Comerica Park. Only one active major league player has played 1,000 games at one ballpark: Yadier Molina at Busch Stadium. Five Tigers -- Al Kaline, Lou Whitaker, Alan Trammell, Charlie Gehringer and Norm Cash - played 1,000 games at Tiger Stadium, but Cabrera will be the first to do it at its successor, which opened in 2000.