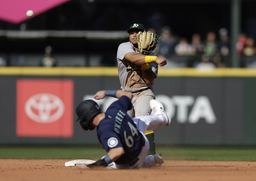 SEATTLE (AP) Luis Castillo struck out eight in six innings of two-hit ball and the Seattle Mariners beat the Oakland Athletics 5-1 on Saturday to keep pace with the Toronto Blue Jays in their bid to host an AL wild-card series.

Castillo (8-6) retired 16 in a row to help Seattle to its fourth consecutive win. The right-hander settled down after giving up two quick hits and a walk in the first inning to fall behind 1-0 - about 12 hours after most Mariners left the ballpark after clinching the club's first playoff appearance in 21 years.

"He was really in total control of the game and I would say that was probably the most stress-free game that we've had here in quite some time," Mariners manager Scott Servais said. "I felt with him out on the mound and how the game was going, the way the crowd was into it today coming off last night, it was a nice, perfectly executed ballgame with a W behind it. So we'll see about sweeping them tomorrow."

Jordan Diaz's RBI single scored leadoff batter Tony Kemp, who singled on Castillo's first pitch. But then Castillo recovered and struck out Conner Capel to end the first inning. Using his slider in concert with a two-seam fastball, he was flawless the rest of the way, teaming with Carlos Santana for three putouts at first base. Castillo finished off his outing with a strikeout of Sean Murphy.

"The slider is really good," Servais said. "And it's a pitch he should probably lean on a little bit more. We saw it today with the movement with his fastball. It's a heck of a combination. He likes to compete. There's no question about it."

Coming off two mediocre outings, Castillo's best move Saturday might have come in the wee hours when he celebrated briefly with his teammates before going home early and getting to bed before the day-game start.

Castillo's next outing will be in the playoffs, the goal general manager Jerry Dipoto had in mind when the Mariners traded for the All-Star before the deadline this summer. The fact that his slider is now working well has him ready for the role.

"Confidence was the key there to be able to throw that pitch," Castillo said through a translator. "It didn't matter what the pitch count was."

The Mariners rested most of their key starters a day after securing a wild-card berth, ending the longest playoff drought in major professional sports in North America. They've got five more games - Sunday against the A's and four games against the Detroit Tigers next week - to catch the Blue Jays and stay ahead of Tampa Bay. The No. 1 wild card hosts a best-of-three series beginning Friday.

"I think he's playing as well right now as he has at any point he's been a Mariner," Servais said. "He's got it rolling and you need guys going like that this time of year. He really set the tone today."

Oakland's J.P Sears kept the Mariners from extending the lead after entering the game to start the second. He struck out six, walked two and gave up just two hits, both of which the A's wiped away with double plays.

"I thought Sears did a great job today commanding the baseball, utilizing the fastball at the top of the zone," A's manager Mark Kotsay said. "His off-speed pitches got some swings and misses. .... The outing was great to end the year on."

A near collision between outfielders Seth Brown and Capel on Torrens' double in right-center helped Seattle start a rally for two more runs in the eighth. Matthew Boyd, Diego Castillo and Matt Festa provided three innings of hitless relief, sending the A's to their sixth straight loss - their 102nd of the season.

Athletics: Oller came off the 15-day injured list Friday from a bout of rib costochondritis, the swelling of cartilage between the ribcage and breast bone. He gave up three runs and three hits, striking out two and walking two before yielding to Sears to start the second. Kotsay said using Oller as the opener allowed the team to manage the former starter's work in a way he was familiar with.

Mariners: LHP Robbie Ray (12-11, 3.58) attempts to halt a three-game losing streak in his last appearance of the regular season.