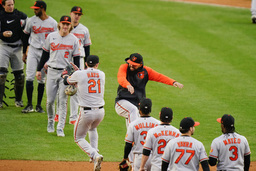 Aaron Judge must go on the road to break the American League home run record, remaining tied with Roger Maris at 61 after going homerless in a three-game series against the Baltimore Orioles that ended with New York's 3-1 loss Sunday.

"It'd be nice to hit it at home and do something special like that for the home fans," Judge said as the Bee Gees' "Stayin' Alive" played in the Yankees clubhouse, "but at the end of the day, I got a job to do, I got at-bats getting ready for the postseason. So it didn't happen, but the season's not over yet."

Judge put one of 68 pitches in play during a series on a blustery, wet autumn weekend, a third-inning single in Friday night's 2-1 loss. He has a four-game series at Texas starting Monday night to top the mark Maris set with the Yankees in 1961.

"I'm sure on some level, obviously, he wants to get it done and get it over with," Yankees manager Aaron Boone said.

Judge struck out three times, stranding the bases loaded in the second inning, and walked once, disappointing a crowd of 44,332 at the Yankees regular-season home finale.

"They're on their feet. They're standing. You can hear a pin drop before the pitch is thrown," Judge said. "It's a pretty cool moment, and it's kind of gearing us up for the postseason."

Judge is 1 for 7 with six strikeouts, five walks and a hit batter since hitting No. 61 at Toronto on Wednesday night.

"A lot of things have to sync up for even the greatest of the great to go deep," Boone said.

Trying to become the first Triple Crown winner since Detroit's Miguel Cabrera in 2012, Judge tops the AL with 130 RBIs. His batting average fell to .311, four points behind league leader Luis Arraez of Minnesota.

"A Triple Crown would be amazing, but I think we're still a long way from that," Judge said.

Baltimore (82-77) guaranteed its first winning season since 2016. The Orioles went 52-110 last year and became the third team to have a winning record one season after losing 110 or more, joining the 1890 Louisville Colonels and 1899 St. Louis Perfectos.

"It's an accomplishment, definitely from where we came from last year," manager Brandon Hyde said.

AL East champion New York (97-61) took another hit to an injury-ravaged bullpen when Ron Marinaccio came out after 12 pitches because of a sore right shin. He'll have an MRI on Monday but thinks he'll be OK for the Division Series opener on Oct. 11. The Yankees already are without Clay Holmes until the playoffs because of rotator cuff inflammation.

"We got the tests done previously and it's come back clean before, so I'm hoping it's the same thing," said Marinaccio, who described it as a season-long ailment.

Aroldis Chapman (3-4) walked three as Baltimore surged ahead in a two-run seventh that included Austin Hays' sacrifice fly off Marinaccio. Chapman has walked 28 in 35 1/3 innings, and his postseason roster spot may be in jeopardy.

"I don't take those decisions," Chapman said through a translator.

Yankees: Chi Chi Gonzalez, a 30-year-old right-hander, allowed one run, four hits and three walks in 4 2/3 innings of his his Yankees debut. He threw to Jose Trevino, his batterymate at Oral Roberts in 2012 and '13.

Orioles: Kyle Bradish gave up one run - unearned - three hits and five walks in five-plus innings and simulated a swung to first-base ump Dan Merzel when he didn't get a call on Judge. ... Logan Gillaspie (1-0) pitched a scoreless sixth in his first big league decision, Bryan Baker struck out five while getting six straight outs, and Dillon Tate got three outs for his fifth save.

Ryan Mountcastle had an RBI double in the firs t. Aaron Hicks, playing on his 33rd birthday, scored from second base in the fifth when Bradish bounced a wild pitch and catcher Adley Rutschman threw the ball into center for an error.

Yankees Hicks saved two runs with a sprinting catch on Terrin Vavra's slicing liner near the left-field line in the seventh.

Orioles: RHP Felix Bautista may not pitch for the rest of the season because of the sore left knee he injured Friday.

Yankees: Matt Carpenter (broken left foot on Aug 8) will not work out initially in the outfield at the Somerset, New Jersey, training camp this week. He was moved to the 60-day IL on Sunday, ruling him out of the Texas series. ... RHP Miguel Castro (strained shoulder) could be activated Monday. ... LHP Wandy Peralta, sidelined since Sept. 18 with back tightness, threw a bullpen session and will face hitters at Somerset on Tuesday or Wednesday.