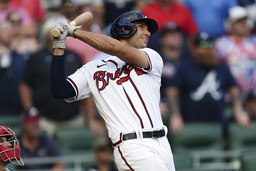 ATLANTA (AP) Nick Castellanos had already carried quite a load with his bat.

When the Philadelphia Phillies needed his glove in the ninth inning, he didn't let them down.

Castellanos drove in three runs and made a potentially game-saving catch, lifting the Philadelphia Phillies over the reigning World Series champion Atlanta Braves 7-6 in the opener of their NL Division Series on Tuesday.

The Phillies have won three straight games to begin these playoffs, hardly looking like a team making its first postseason appearance since 2011. They followed up their wild-card sweep of the St. Louis Cardinals with a victory over the team that finished 14 games ahead of them in the NL East.

It wasn't easy. Matt Olson hit a three-run homer in the ninth off Zach Eflin to bring the Braves within a run.

But Castellanos, capping off a brilliant all-around day, made a sliding catch in right field for the second out to help snuff out the comeback - a clutch play from a player frequently maligned for his defense.

"Do anything I could to not let it hit the ground," Castellanos said of his mindset.

He sprawled out on the grass - arms raised above his head, the ball securely in his glove - before rolling over and flipping it back to the infield.

Castellanos appears to be finding his groove after missing most of September with an oblique injury.

"I hope that's the start of something, because he's been out for a long time," manager Rob Thomson said. "Maybe he's really getting his timing back now."

Alec Bohm added two RBIs for the Phillies, who built a 7-1 lead by the top of the fifth and made it stand up against a Braves lineup that squandered numerous chances to get back in the game earlier.

Travis d'Arnaud homered and drove in the other three Atlanta runs, but the team that won 101 games during the regular season and edged the New York Mets in a thrilling NL East race suddenly finds itself in a best-of-five predicament.

Game 2 is Wednesday afternoon in Atlanta before the series shifts to Philly.

Castellanos had a run-scoring single in the first - the Phillies jumping ahead 2-0 before many fans had settled in their seats for the lunchtime start - and added a two-run single in the fourth.

And that catch on William Contreras' opposite-field liner truly made it a day to remember.

Max Fried, whose last postseason start was a World Series-clinching victory over the Astros, failed to get through the fourth against the Phillies.

The Braves ace was roughed up for eight hits and six runs - two of them unearned, but that was because of a throwing error by Fried.

The Phillies, on the other hand, have been playing like playoff-hardened veterans even though their 11-year postseason drought was the National League's longest.

They started the season dismally, which led to the firing of manager Joe Girardi in early June.

Thomson guided a remarkable turnaround as interim manager, the Phillies bouncing back to claim the NL's final wild card.

Thomson had the interim removed from his title on Monday, agreeing to a two-year deal to remain at the helm through 2024. The Phillies gave him quite a thank-you in his first game as plain ol' manager.

D'Arnaud led off the second with a homer deep into the left-field seats off Ranger Suarez to make it 2-1. But the 22-year-old left-hander was not flustered.

Suarez went just 3 1/3 innings but made a couple of big pitches to keep the Braves down.

After walking two to load the bases in the first, Suarez escaped on Contreras' inning-ending double play.

Atlanta loaded the bases again in the third, but d'Arnaud struck out on a high fastball out of the zone. Suarez pumped his fist emphatically on the way to the dugout.

"We had him on the ropes," Atlanta manager Brian Snitker said. "We just couldn't get a big hit."

The Braves put two more runners aboard in the fourth. This time, the threat ended with Dansby Swanson whiffing at a 3-2 pitch from Andrew Bellatti, who was credited with the win.

Swanson slammed his helmet to the dirt in frustration - which was pretty much indicative of how this day went for the defending champs.

The Phillies knocked out Fried in the fourth, the left-hander leaving with runners at second and third. Jesse Chavez had a chance to escape the jam after he struck out Realmuto, but Castellanos came through with a two-our single to left that made it 6-1.

This was quite a postseason comedown for Fried.

In Game 6 of last year's World Series, he pitched six scoreless innings in a 7-0 victory that clinched Atlanta's first title in 26 years.

Fried was stricken with a stomach bug in the final week of the regular season but insisted he was fully recovered.

"I'm not going to make any excuses," he said. "I took the ball today and put us in a big hole right off the bat."

Phillies reliever David Robertson was left off the NLDS roster after injuring his right calf jumping to celebrate Bryce Harper's home run in the clinching wild-card victory at St. Louis.

Spencer Strider, the Braves' hard-throwing rookie, made the roster after he was sidelined since Sept. 18 with a sore left oblique. He was not available for Game 1, but could pitch later in the series.

RH Kyle Wright, who led the majors with 21 wins, faces a must-win situation when goes for the Braves in Game 2. He'll be opposed by Phillies RH Zack Wheeler (12-7, 2.87), who grew up in suburban Atlanta.