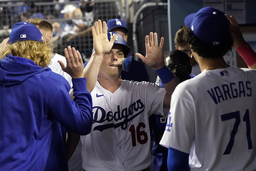 LOS ANGELES (AP) The well-rested Los Angeles Dodgers raced out to a big lead early and hung on against the upstart San Diego Padres.

Trea Turner homered and doubled as the Dodgers won 5-3 on Tuesday night in the NL Division Series opener.

Behind 17-game winner Julio Urias, the Dodgers led 5-0 after three innings and appeared to be on their way to another blowout of the Padres.

Los Angeles dominated in the regular season, owning a 14-5 advantage and outscoring San Diego 109-47. The 111-win Dodgers claimed the NL West and the Padres finished second, 22 games back.

"We've seen a lot of them lately, especially in the last month or so," Turner said. "Kind of knew what to expect. Still have to execute and still have to get the results, but I think we just were ourselves and didn't give anything away."

With Sandy Koufax watching from the owners' box, Urias retired the first eight batters he faced until Austin Nola doubled with two outs in the third.

"We have to give a lot of credit to our offense," Urias said through a translator. "They did a good job battling, getting those runs early and putting us in a good spot to win."

Chris Martin, who had two saves this season, gave up a single in the ninth, when the Padres had the potential tying run at the plate. Struggling closer Craig Kimbrel was left off the Dodgers' roster for this best-of-five matchup.

Game 2 is Wednesday night at Dodger Stadium before the series shifts south to San Diego.

"No moral victories, but the latter part of the game was better than the first part for us," Padres manager Bob Melvin said.

"We felt like we had a chance in the latter innings to win this game," he said. "I think everybody is pretty eager to get back out here again."

The Padres were coming off a win in the decisive Game 3 of the wild-card series Sunday night over the Mets in New York.

"We need to put this one behind us and keep competing like we've been doing all year," said Manny Machado, who was 1 for 4 with a strikeout.

The Dodgers, who had five days off after drawing a bye, showed no signs of rust.

In the first, Turner hit a 419-foot shot into the left-field pavilion for his second career postseason homer and first as a Dodger. Two batters later, Will Smith doubled and scored on Max Muncy's two-out single for a 2-0 lead.

The Dodgers batted around in the third, tacking on three more runs.

Turner doubled leading off and after Freddie Freeman flied out, Smith stepped in and doubled to deep left-center, nearly the same spot where Turner's ball landed. Gavin Lux doubled to the right-field corner with two outs, driving in Smith and chasing Mike Clevinger.

Steven Wilson came in and promptly walked Trayce Thompson to load the bases.

Choking up, Cody Bellinger initially was thought to have been hit by a pitch and took first base as Muncy was forced in. But upon video review, it appeared the ball hit the knob of the bat. Bellinger was called back to the plate and Muncy returned to third.

Bellinger was then safe at first on an error by first baseman Wil Myers, scoring Muncy. The ball hit off the heel of Myers' glove and he missed it on the pickup, leaving no chance to make a play on the speedy Bellinger.

The Dodgers' offense - baseball's highest-scoring this season - went quiet after the third. Their lone baserunner was Freeman, who walked. Mookie Betts and Freeman were a combined 0 for 7 with two strikeouts.

The Dodgers hadn't played a must-win game since mid-June before running away with the division. But they found themselves in trouble in the fifth.

That's when the Padres finally got to Urias, closing to 5-3 after he gave up three straight hits.

Myers led off with an opposite-field solo shot to left. Trent Grisham had an RBI grounder that scored Jake Cronenworth, who had singled. Nola's sacrifice fly scored Ha-Seong Kim, who doubled.

San Diego threatened again in the sixth against Evan Phillips, but the defense bailed him out.

Juan Soto drew a leadoff walk. Booed heavily by the crowd of 52,407, Machado followed with an infield trickler that the Dodgers hoped would roll foul. It did not, and went for a single.

After pinch-hitter Josh Bell struck out, Myers came up as the potential go-ahead run.

Myers grounded into an inning-ending double play, started by second baseman Gavin Lux. He flipped to Turner, and the shortstop double-clutched before firing to first to get Myers.

Urias allowed three runs and four hits in five innings. The left-hander struck out six and walked none.

Clevinger gave up five runs - four earned - and six hits in 2 2/3 innings. The right-hander struck out three and walked two.

Turner and Soto greeted each other briefly before the game. They were teammates on the Washington Nationals until Turner joined the Dodgers last season and Soto came to the Padres at this year's trade deadline.

Soto came to Dodger Stadium to cheer on Turner in last year's postseason.

"A mutual respect that we have for each other," Turner said. "We're boys. I know he wants to beat us, as do I want to beat them. I'll probably talk to him after the series is over and in the offseason."

The wind picked up in the last couple innings, with the center-field flags blowing straight out. Rain began falling after the final out, although it didn't last long. The grounds crew had the rare chance to roll out the tarp and cover the infield.

"It was definitely different," Turner said. "We haven't really had that all year."

Kimbrel had already been demoted from his ninth-inning role two weeks ago after struggling much of the season as the successor to Kenley Jansen, who left as a free agent last winter.

RH Yu Darvish, who had a 3.10 ERA in the regular season, starts Game 2 for the Padres. LH Clayton Kershaw, the three-time Cy Young Award winner, goes for the Dodgers.