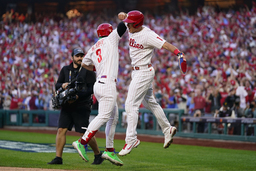 PHILADELPHIA (AP) Rhys Hoskins raised his arms in triumph, and then spiked his bat in celebration - a raw, emotional moment destined for Philadelphia's rich sports history.

Hoskins then trotted around the bases in front of a rabid crowd of 45,538 fans already in a tizzy over the Phillies' first home playoff game in 11 years. The whole thing felt like an out-of-body experience for the veteran slugger.

"It's just the moment, man," he said. "I didn't know what I did until a couple innings later, really."

Hoskins burst out of his postseason malaise with a three-run homer and slammed his bat in celebration, and Bryce Harper hit a two-run shot that sent Philadelphia to a 9-1 win over the Atlanta Braves in Game 3 of their NL Division Series on Friday night.

Harper added an RBI double as Philadelphia took a 2-1 lead in the best-of-five matchup against the reigning World Series champions. The Phillies can advance to the NL Championship Series with a Game 4 win at home on Saturday.

Harper had a bit of Tug McGraw in him when he relayed a rallying cry to Hoskins.

Hoskins turned to Harper on the dais and asked him, "You want to do it again?"

"Let's do it again," Hoskins replied.

Phillies fans should save the rally towels - the Phillies played like a team that wants to keep Red October alive.

Bryson Stott got the rally going in the third inning with an RBI double off Braves rookie Spencer Strider. Kyle Schwarber then was walked intentionally.

Hoskins, mired in a 1-for-19 postseason slump, crushed a 93.8 mph fastball into the left field seats for a 4-0 lead. Hoskins raised his arms sky high, slammed his bat into the grass and he skipped his way to first base.

The exit velocity? It took about 2 seconds for Harper to hurdle over the dugout rail and toss his helmet in the air. Hoskins leapt into a violent elbow forearm exchange - think, Bash Brothers - with Stott as he crossed the plate.

"I don't know if my feet touched the ground," Hoskins said.

Strider, who pitched for the first time in almost a month because of a strained left oblique, gave up one more single before he was lifted for Dylan Lee.

Playing his first home playoff game with the Phillies, Harper hammered the ball into the twilight for his second postseason homer and a 6-0 lead. Phillies fans that held hand-cut letters that spelled out "Harper" bounced in delight in the stands.

Harper, who embraced Philly and the Phanatic and the fans from the moment he signed a $330 million, 13-year deal in 2019, pointed to a fan that held a "Hit That Jawn" sign behind the dugout.

Jawn is a Philly noun used to describe anything.

Harper's shot made Philly feel everything.

"This is what it's all about. We have an opportunity to clinch at home," the two-time NL MVP said.

Aaron Nola, pitching the best baseball of his career, was an October ace again in shutting down a Braves team that won 101 games and the NL East. He gave up five hits, walked two and struck out six in six-plus innings.

Nola, the longest-tenured Phillie, was on it from the jump. He needed only 10 pitches in the second inning to strike out the side. The Braves touched him for an unearned run in the sixth. He left the game in the seventh to a standing ovation.

"Try to treat tonight just like every other start. Try not to be anybody I'm not," Nola said. "Try not to do anything I'm not capable of doing or haven't done all year. Just to be myself."

The Phillies played their first postseason home game since a 1-0 loss in the 2011 NLDS to Chris Carpenter and the eventual champion St. Louis Cardinals. They waited 11 years - 4,025 days, to be exact - and a whopping 14 straight road games since September to get back. The Phillies ended the season on a 10-game road trip and then played their first four playoff games on the road.

Phillies fans - and the Phanatic from atop the dugout - mocked Atlanta's tomahawk chop, and red rally towels spun like helicopter rotor blades from the moment they snagged them at the gate. As Strider trudged off the mound in the third, one Phillies fan gleefully wagged his middle finger toward the pitcher for his entire walk to the dugout.

Strider could only shake his head after the shortest start of his brief career at 2 1/3 innings.

"I was going to pitch until they took the ball away and try to put up zeros," Strider said.

The Phillies had never scored five runs in a postseason inning before 2022. They've done it twice now, the first time, of course, the six-run rally in the ninth against the Cardinals in Game 1 of the NL wild-card series.

Harper rocked an RBI double to center in the seventh and Game 1 star Nick Castellanos drove in two runs in the inning for a 9-1 lead.

And one more time, the Phillies fans went wild.

"Absolutely insane. Electric. Nothing that I could have ever dreamed about," Harper said. "It was whoa. It was chills again because that was unbelievably cool. I hope it's like that for the next two weeks."

The Phillies held a moment of silence for Corey Phelan, a 20-year-old minor league pitcher who died Wednesday of non-Hodgkin lymphoma. He last pitched in the minors in 2021.

"We've got to win one in a row right now is what we've got to do," Braves manager Brian Snitker said. "We've got the perfect guy out there to do it. Charlie's been in these situations many times. And we need to start scoring some runs."