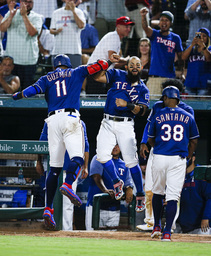 ARLINGTON, Texas (AP) Danny Santana had already hit one of the five home runs by the Texas Rangers. With a chance to win the game with two outs in the ninth inning, he lined a ball up the middle and then saw Houston center fielder George Springer on a full sprint toward the ball.

"When I saw Springer going after it ... I think he is going to catch it," Santana said through a translator. "I'm glad he didn't."

The liner tipped off the end of Springer's glove as the All-Star made an impressive all-out diving attempt, and Elvis Andrus scored from second base to give the Rangers a 9-8 win over AL West-leading Houston on Friday night. They rallied from a four-run deficit after Gerrit Cole struck out 13 in six innings to take over the major league lead.

"That was an amazing feeling, an amazing game all around," said Ronald Guzman, whose two-run homer high off the right-field pole in the eighth tied the game at 8. "They hit us, we hit them back. Everything was in there."

Andrus had a one-out single and a stolen base before All-Star slugger Joey Gallo drew a walk off Roberto Osuna (3-2). Rougned Odor then struck out for the third time before Santana's game-winning hit.

"It went off the end of my glove," said Springer, who had been shaded toward left field and had to run a long way to even have a chance. "It's kind of one of those ones where it's all or nothing."

Shawn Kelley (5-2), the fifth Texas pitcher, had a perfect ninth.

Rookie Yordan Alvarez hit two of the four homers for the Astros (57-35), who have come out of the All-Star break with two consecutive losses to the surprising Rangers (50-42). Jose Altuve and Yuli Gurriel, with his 10th homer in 13 games, also went deep.

Cole left with an 8-4 lead and his 10th game this season with at least 10 strikeouts. His 183 strikeouts for the season pushed him two past Washington's Max Scherzer for the big league lead. Cole allowed more than two earned runs for the first time in a span of nine starts since his last loss May 22.

The Houston right-hander threw 74 of 101 pitches for strikes. Three of the four hits Cole allowed were solo homers to Shin-Soo Choo, Santana and Gallo. Tim Federowicz hit a homer after Cole was done.

"It was like a heavyweight slugfest," said Cole, who has 42 strikeouts over 22 1/3 innings in four starts against Texas this season. "Came up short, but it was an entertaining game. It was quite a game."

Choo had a leadoff homer for the Rangers, and Santana's one-out blast in the second tied the game at 2-2. The next nine outs recorded by Cole, into the fifth, were on strikeouts. The only Texas run in that span was Gallo's 21st homer leading off the fourth.

"That doesn't surprise me in this park. That wasn't a lot to do with the park, though. Their approach was good, they hit the ball when they needed to," Astros manager AJ Hinch said. "They were tough at-bats. It was kind of a true outcome-type game. They were punching out a ton, they were walking, they were homering and they got the single at the end."

It was the fifth time this season the Rangers won after trailing by four runs or more. ... The nine combined homers were the most in a game at the Rangers' ballpark since 2010, when Texas and Boston also had nine. ... Alvarez has nine homers and 27 RBIs in his first 21 career games. ... Gallo has four homers and 15 strikeouts in 22 career at-bats against Cole. ... Andrus' two stolen bases gave him 21 for his club-record 10th season with at least 20.

Astros: All-Star INF Alex Bregman didn't play a day after needing four stitches for a cut on his chin. A groundball took a nasty hop and hit him on the face when he was playing shortstop in the series opener. ... RHP Joe Smith was activated from the 60-day injured list. The 35-year-old pitcher had surgery last December to repair a ruptured Achilles tendon in his left leg.

Rangers: Hunter Pence, out since June 17 (right groin strain), was the DH for Double-A Frisco for the second night in a row, and went 0 for 4 with three strikeouts. He is expected to play there again Saturday. The injury kept Pence from playing in the All-Star Game after being selected by fans as the AL's starting designated hitter.