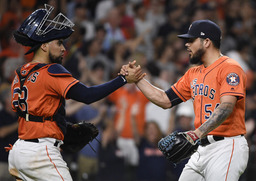 HOUSTON (AP) Carlos Correa returned to the dugout after hitting his second homer Friday night, beat his chest and twice repeated the words: "I'm back."

"I feel great," Correa said. "It felt great to get the rhythm, timing and today was a positive day. Obviously it gives you a lot of confidence."

Correa homered twice and Jose Altuve and Alex Bregman also connected and the Astros dropped their magic number to clinch the AL West to one by beating the Los Angeles Angels 6-4.

A win by the Astros or a loss by the Athletics on Saturday will give Houston a third consecutive division title. The Astros have won six straight games and already secured a playoff spot.

"We can feel it," Altuve said. "We're excited. We all are anxious about things right now which is normal because we want to make it happen."

Altuve sent Jaime Barria's fifth pitch into the left field seats to spark a five-run first inning, which also included Bregman's 38th homer and Correa's first connection after missing nearly a month with a sore back - this was his second game since returning. Aledmys Diaz followed Correa with a double and scored on Josh Reddick's single to make it 5-0.

"I couldn't really locate my slider," Barria said through a translator. "All of the runs I gave up were with my offspeed that I left up in the zone."

Zack Greinke (17-5) retired his first six batters before Kevan Smith hit his first pitch of the third inning into the bullpen in right-center to cut the lead to 5-1.

Correa's second homer came with one out in the bottom of the inning to put Houston up 6-1.

Andrelton Simmons hit a two-run single in the fourth and Smith scored him to pull Los Angeles within two.

Greinke yielded seven hits and four runs in five innings to win his third straight decision. Greinke has won seven of eight decisions since a trade from Arizona on July 31. He didn't walk anyone for the fourth straight start, which is the longest streak of his career.

Roberto Osuna allowed one hit in a scoreless ninth for his 36th save.

Altuve's home run was his 30th this season and gives the Astros four players with at least 30 for the first time. Along with Altuve and Bregman, George Springer (35) and Yuli Gurriel (30) have also reached the mark.

Angels: OF Mike Trout had surgery to remove a growth from his right foot Friday in California, and manager Brad Ausmus said he texted with him and that he was feeling good. Trout last played Sept. 7 and the team announced that his season would end early because of the problem with his foot.

Astros: All-Star reliever Ryan Pressly was activated from the injured list Friday after missing a month after having arthroscopic surgery on his right knee. Pressly struck out two in a scoreless seventh. ... Gurriel was out of the lineup on Friday because of a stomach ailment.

Angels radio broadcaster Mark Langston had a medical emergency Friday night and was taken to a hospital where he was alert and undergoing testing. The 59-year-old Langston pitched in the majors for 16 seasons, including eight for the Angels.

Altuve on hitting 30 home runs for the first time in his career: "I always wanted to hit 30 homers. I always said it before. A lot of people didn't think I could play in the big leagues. They kept telling me: `No, no,' and then all of a sudden I hit 30 homers, so that's pretty good."

Angels: LHP Patrick Sandoval (0-3, 4.91 ERA) will start for Los Angeles on Saturday night. Sandoval allowed two hits and one run in four innings but did not factor in the decision in a 6-4 win over Tampa Bay on Sunday.

Astros: LHP Wade Miley (14-5, 3.71) is scheduled to start for Houston on Saturday. Miley yielded seven hits and two runs in six innings for a win against Kansas City in his last start.