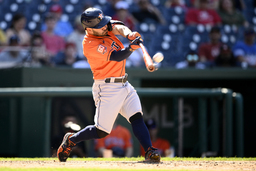 Houston Astros' Jose Altuve hits a homerun during the ninth inning of a baseball game against the Washington Nationals, Sunday, May 15, 2022, in Washington. AP Photo/Nick Wass)

Jose Altuve, Martin Maldonado and Chas McCormick also homered for the Astros. Gurriel finished the series 8-for-12 with two homers and four RBIs.

"I'm not surprised," manager Dusty Baker said of Gurriel, who has raised his average to .248 during a five-game hitting streak. "Water seeks its own level. I wasn't worried about Yuli. He was probably more worried about himself than I was worried about him. Yuli's going to hit."

A day after allowing 13 runs as Houston's 11-game winning streak ended, Astros pitchers returned to form, tossing their fourth shutout in seven games, a four-hitter kicked off by Verlander.

After taking a no-hitter into the eighth inning in his last start, Verlander (5-1) didn't allow a hit Sunday until surrendering back-to-back singles with one out in the fifth and Houston up 2-0. Baker opted to leave him in and Verlander retired Cesar Hernandez on a popup before getting Juan Soto to ground out with his 107th pitch.

"He did a great job. He battled," Baker said. "Specifically in the fifth. He had some tough hitters up there. Boy, that was the turning point in the game. Put us in a position to come back in, take a breather and score some more."

Verlander struck out five and walked three in his in his seventh start since returning from Tommy John surgery. The right-hander was making his first start of the season on four days' rest and threw his most pitches since his no-hitter in September of 2019.

"You kind of go do something new and see how you respond, see how the elbow responds," Verlander said. "I wouldn't be surprised if it gets a little sore, just the first time being really stressed like that."

Nationals starter Patrick Corbin (0-6) was solid early before allowing home runs in the fifth, sixth and seventh innings. He allowed five runs on six hits over six-plus innings. Washington has lost each of Corbin's eight starts.

McCormick walked with one out in the fifth. Corbin caught him leaning at first, but Josh Bell's throw to second was wide and McCormick was safe. The Nationals challenged but lost the appeal, and Maldonado sent Corbin's next pitch over the visitors' bullpen in left center to make it 2-0.

Gurriel hit a solo homer in the sixth and McCormick's two-run shot with no outs in the seventh ended Corbin's afternoon. Altuve homered leading off the ninth.

"Look who we faced today," manager Dave Martinez said. "We've been swinging the bat well. Regardless of whether or not we score runs, we've been getting five, six, seven, eight hits a game. Today, that guy was good."

Astros: SS Jeremy Pena (knee) missed his third game. Baker said Saturday he expected Pena to play Sunday, but Pena woke up sore and was given another day.

Infielder/outfielder Mauricio Dubon, acquired in a trade with the San Francisco Giants on Saturday, made his Astros debut. He played the final two innings at shortstop and went 0-for-1. Houston optioned infielder Niko Goodrum to Triple-A Sugar Land. He hit .116 in 15 games for the Astros.

Nationals first baseman Josh Bell was 1-for-3 with a walk. He's hitting .338 with five doubles, two homers, nine RBIs and 13 runs scored over his past 20 games.