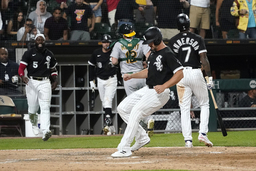 CHICAGO (AP) Gavin Sheets hit a tying, two-run homer in the seventh inning and scored the winning run on a wild pitch in the ninth to lift the Chicago White Sox over the Oakland Athletics 3-2 Saturday night.

Sheets lined a leadoff double against Zach Jackson (2-3) in the ninth and advanced to third on Josh Harrison's sacrifice bunt before Jackson bounced a slider with Tim Anderson at the plate.

Sheets came through with two big extra-base hits off A's relievers after popping out twice against Oakland starter Paul Blackburn, including in the fifth with runners at second and third.

"I stayed in it mentally," Sheets said. "Obviously super frustrated in that I've got to get the job done in that situation.

"Excited that I got two more chances and mentally stay in it and get ready for two big ones."

Liam Hendricks (2-3) worked around Elvis Andrus' double in the top of the ninth for the win.

Sheets homered in the seventh off reliever Austin Pruitt to help the White Sox (50-50) stop a two-game mini-skid.

"That shows you his potential as a hitter when you can take a ball in and hit it 500 feet and take a breaking pitch to the opposite field," manager Tony La Russa said.

Chicago, the preseason favorite to win the AL Central, is three games behind first-place Minnesota and a game behind second-place Cleveland.

"We've still got a lot of games left," Sheets said. "And it's the fun part of the season. Got a taste of the postseason last year and want to get back."

Sean Murphy also went deep for the A's. The catcher called for a breaking pitch that got away to end the game.

"Trying to get in front of it, but I felt it was the right pitch," Murphy said. "I'm not going to not throw it. You just have to have faith and call the game as it needs to be called."

Anderson batted leadoff and singled twice as the All-Star shortstop appeals a three-game suspension from Major League Baseball for making contact with plate umpire Nick Mahrley during an argument Friday.

The discipline was announced just before Saturday's first pitch. Anderson, who will remain active until his appeal is heard, declined to comment on the penalty after the game.

Blackburn exited with a 2-0 lead after allowing five hits, walking none and striking out four. A first-time All-Star this season, Blackburn had lost three straight with a 13.19 ERA during the slide.

The right-hander had allowed 21 runs and 20 hits in his previous 14 1/3 innings and was pounded for 10 runs by Texas last Sunday.

"I feel like everything was pretty synched up today," Blackburn said. "From my last start to this start, I feel like I was getting back to getting the groundballs I was used to getting. That's a good sign for me. My sinker's sinking and not running."

Murphy hit his 12th homer to left field off Cueto in the first to put Oakland ahead 1-0. Brown launched a 452-foot drive to right in the third, his 15th.

Brown hit two solo homers Friday in his first game after the birth of his first child, son Cannon.

Pruitt, the second A's reliever, hit Andrew Vaughn with a pitch to start the seventh. Sheets followed with his homer to right.

Minnie Minoso, inducted into the Baseball Hall of Fame last Sunday, was honored by the White Sox in a pregame ceremony.

A native of Cuba who grew up on a sugar plantation, Minoso was a nine-time All-Star and finished his career with 2,110 hits and a .299 batting average. He died in 2015.

He starred with the New York Cubans in the Negro Leagues before becoming the first Black Latino player in the major leagues in 1949, two years after Jackie Robinson broke in.

Athletics: Manager Mark Kotsay said INF Jed Lowrie (left shoulder) was set to play seven to nine innings in the field Saturday in his rehab assignment with Triple-A Las Vegas. Lowrie, out since June 27, will likely be the DH at Las Vegas on Sunday.

White Sox: OF Luis Robert was scratched from a rehab game with Triple-A Charlotte due to cold symptoms, but La Russa said Robert would be flying back to Chicago. The White Sox originally placed Robert on the IL retroactive to July 19 with lightheadedness and blurred vision. . La Russa said RHP Reynaldo Lopez (lower back strain) is making progress, but there's no timetable for his return.