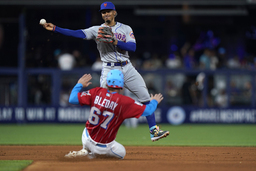 Jeff McNeil singled twice and doubled, and Mark Canha also had three hits for the NL East leaders, who won their sixth straight and finished with a season-high 19 hits - 12 of them against Lopez.

"We focused on getting the good pitches," Lindor said. "We got them and we didn't miss. It was one of those days where we got our pitches and we hit it wherever we wanted to hit it."

Lindor went 7 for 11, doubled twice and homered during the weekend series. He has hit safely in 18 of 19 games.

"I didn't even know I was 7 for 11," Lindor said. "Just seeing the baseball and putting a good swing on the ball,"

The Marlins lost their seventh straight at home.

The Mets built a 6-0 lead against Lopez, chasing the right-hander after 2 2/3 innings. Subject of trade rumors during the week, Lopez (7-6) struck out one in his shortest start of the season.

Pete Alonso's RBI double and run-scoring singles from McNeil and Canha put New York ahead 3-0 in the first.

Tyler Naquin had his first hit as a Met when his run-scoring triple in the third made it 4-0. Acquired in a trade from Cincinnati on Thursday, Naquin scored on Canha's single. Brandon Nimmo followed Luis Guillorme's single with an RBI single that scored Canha and ended Lopez's outing.

"This is their third time seeing me this season," Lopez said. "So they're able to go back to see the previous games and see if I'm doing things in a way that shows a pattern and sometimes they have a good game plan."

When the series began, the Marlins were in the periphery of the third NL wild card spot and had heightened expectations with ace Sandy Alcantara and Lopez pitching in two of the games. Instead, the Mets combined for 10 runs and 20 hits against Miami's top two starters.

"Our guys came out with the type of intensity that you need in facing Lopez," Mets manager Buck Showalter said. "We faced some good pitching here. It was fun to watch. There were a lot of contributors."

The huge early advantage allowed Walker to pitch into the sixth and earn the decision.

"It was easier today because we scored a lot of runs," Walker said. "I was just able to attack the zone."

The Marlins snapped a 20-inning scoreless skid on Jacob Stallings' RBI single in the fifth.

Jesus Sanchez's RBI groundout and rookie Charles Leblanc's solo homer in the sixth got Miami within 7-3. Leblanc's first major league blast ended an 11-game home run drought in their ballpark for the Marlins.

Nimmo reached on a fielder's choice that scored Canha in the seventh. Nimmo then raced home from first on Lindor's two-out hard smash which bounced off second baseman Joey Wendle and rolled into centerfield.

Mets: RHP Max Scherzer (6-2, 2.09) will start the opener of a three-game series Monday at Washington.

Marlins: Have not announced a starter for the opener of their home series against Cincinnati on Monday.