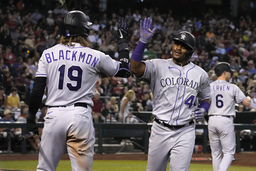 PHOENIX (AP) Ryan McMahon hasn't had the season he wanted since signing his $70 million, six-year deal during spring training.

The Colorado Rockies third baseman certainly was money when it counted on Saturday night.

McMahon hit a tiebreaking homer in the ninth, Antonio Senzatela threw seven quality innings and the Rockies rallied for a 3-2 win over the Arizona Diamondbacks.

McMahon drilled a high fastball from Ian Kennedy (4-5) into the left-center seats for the game-deciding drive. The hard liner left the ballpark in a hurry, just clearing the wall to the left of the 413-foot sign. It was his 10th homer of the season.

"The organization invested in you, so you want to be good for your teammates and help the club win," McMahon said. "I haven't done what I think I'm capable of this season, but there's still a lot of season left."

The Rockies rallied twice from one-run deficits in the late innings. Colorado rookie Elehuris Montero hit the first homer of his big league career to tie it 2-all in the eighth. The 23-year-old also had a double in the third.

Senzatela gave up two runs on nine hits over seven innings, striking out two and walking none. Carlos Estevez (3-4) worked a scoreless eighth, and Daniel Bard handled the ninth for his 23rd save in 25 opportunities.

Arizona starter Merrill Kelly - the NL pitcher of the month in July - kept his momentum going into August, giving up two runs on seven hits over seven innings. He struck out five and walked one, but couldn't get the win.

"It's a shame because he threw the ball extremely well," Diamondbacks manager Torey Lovullo said. "I felt like he was in total control. I think it was 70 strikes out of 93 pitches. It's a typical Merrill outing that he's been having over the past several weeks."

The right-hander extended his scoreless streak to 21 innings until the Rockies broke through in the seventh when Randal Grichuk's single brought home C.J. Cron, tying the game 1-all.

"It was a really good pitching duel, for sure," Colorado manager Bud Black said. "Senzatela hung right there with him. ... The four-pitch mix is something we've been stressing and now he's starting to have confidence in that mix."

The Diamondbacks answered quickly in the bottom half when Daulton Varsho, the leadoff hitter, smoked Senzatela's first pitch into the right-field seats for a 2-1 lead. It was his second homer in two days.

That set the stage for the solo homers from Montero and McMahon. It was a nice comeback for the struggling Rockies, who are 5-12 since the All-Star break.

The Diamondbacks and Rockies are both trying to avoid the cellar in the NL West, a division that's been dominated by the big-spending Los Angeles Dodgers and San Diego Padres. The Rockies improved to 48-62 while the D-backs fell to 47-59.

Arizona scored in the first on an RBI single by Christian Walker.

Walker, Carson Kelly and Ketel Marte all had two hits.

The D-backs blew a good scoring opportunity in the fifth inning when Seth Beer had a rough baserunning miscue.

With one out and runners on second and third, Josh Rojas sent a soft liner to right field that was caught by Colorado's Charlie Blackmon. Beer was the runner at third, took a few steps toward home on contact, went back to tag at third, then stumbled as he left the bag. He kept running anyway, lumbering home as the crowd groaned.

Blackmon threw him out easily, ending the inning.