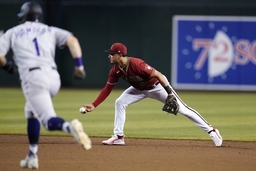 PHOENIX (AP) It's been a slog of a year for Mark Melancon, a four-time All-Star who already has lost 10 games this season, which cost him his job as the primary closer for the Arizona Diamondbacks' bullpen.

Thanks to some tired arms, Melancon got another chance on Sunday. He didn't let it go to waste.

Daulton Varsho trotted home with the go-ahead run in the eighth thanks to a balk, Melancon earned his 15th save with a scoreless ninth and the Diamondbacks won the series from the Colorado Rockies by rallying for a 6-4 victory.

"He's a true professional," D-backs manager Torey Lovullo said of Melancon. "The bottom line is he wants to win, doesn't care about anything else, and he'll do whatever it takes to help this team win a baseball game."

Melancon helped the D-backs on Sunday in a familiar role. The 37-year-old was signed to a $14 million, two-year deal during the offseason because he's been so good and consistent during his 14-year career.

Melancon said his recent struggles have been frustrating, but it's given him an opportunity to dig deep into analytics and figure out a way to bust of his slump. It might be too early to say all that studying has worked, but Sunday was a step in the right direction.

"Doing this my entire life, you can still get better," Melancon said.

The D-backs trailed 4-2 in the sixth but Emmanuel Rivera - added in a deal with the Kansas City Royals at the trade deadline - hit a solo shot that cut the deficit to 4-3. It was his seventh homer of the year and first with his new team.

Josh Rojas had an RBI double in the seventh that tied the game at 4-all.

Arizona loaded the bases in the eighth off Rockies reliever Alex Colome (2-6), who then balked, failing to come to a set position before delivering his pitch. That allowed Varsho to trot home for the go-ahead run before Sergio Alcantara pushed the lead to 6-4 with a sacrifice fly to left.

Colome's had a solid season, coming into Sunday's game with a 3.67 ERA. But he's the midst of a rough stretch, taking the loss in three of his past four outings.

"He's a little tentative to get in the strike zone, but you can't pitch like that," Rockies manager Bud Black said. "So we'll have that conversation."

Arizona took two of three games in a series between two teams languishing at the bottom of the NL West.

Melancon handled the ninth for his 15th save in 18 opportunities. The Rockies loaded the bases with two outs but Randal Grichuk grounded out to end the game.

The Rockies rallied from a 2-0 deficit with four runs in the sixth off D-backs reliever Kevin Ginkel, who allowed all six runners he faced to reach base. C.J. Cron had the big blow with a two-RBI double into the left field corner while Elehuris Montero also had an RBI single.

Christian Walker put the D-backs up 2-0 in the first inning, launching a two-run shot into the left-center seats. The cleanup hitter leads the team with 26 homers.

Jose Urena started for the Rockies on the mound, giving up three runs over six innings. Colorado has a 5-13 record since the All-Star break.

Hall was with the Dodgers organization for 12 seasons, starting as an intern in 1992 in Vero Beach, Florida. He eventually worked his way to Sr. Vice President of Communications before leaving in 2004.

The Rockies have a day off on Monday before hosting the St. Louis Cardinals for a series starting Tuesday. Colorado will start RHP Ryan Feltner (1-3, 5.75 ERA). St. Louis starts RHP Miles Mikolas (8-8, 2.92).