Realmuto, Wheeler lead Phils past Marlins 4-1 for 6th in row 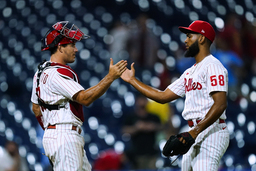 Jean Segura also went deep for the Phillies, who have won 11 of 12 while improving to 40-19 since June 1. Philadelphia started the day in second place in the NL wild-card standings.

"When a team is doing everything well like we are right now, winning becomes contagious," Realmuto said.

JJ Bleday homered for the Marlins, who have lost eight of 10.

"They have a club that's dangerous," Miami manager Don Mattingly said of the Phillies. "They can put runs on the board and they're throwing the ball well. That's a pretty good combination."

The game was delayed 32 minutes at the start by rain and again for 28 minutes with one out in the bottom of the seventh.

"We're playing well and doing all the things right fundamentally," he said.

Seranthony Dominguez pitched a scoreless ninth for his seventh save.

Philadelphia gave Wheeler a run in the first with some help from the Marlins. Second baseman Joey Wendle and right fielder Bryan De La Cruz collided on Alec Bohm's pop fly that would've ended the inning. Instead, that put Bohm on second after a two-base error charged to De La Cruz. Realmuto followed with a double off Braxton Garrett (2-6) to make it 1-0.

After a slow start, Realmuto has turned it around at the plate. He has raised his average 30 points since June 28 and is batting .268, helped by three homers and seven RBIs in his last three games.

"Nothing necessarily clicked," Realmuto said. "I just got back to what I've done well in the past. I went back to the drawing board, got away from mechanical issues and trusted my approach that's worked for me since I've been in the big leagues."

Miami tied it on Bleday's leadoff homer in the fourth before the Phillies went ahead for good with two runs in the bottom half on Realmuto's drive to left field just inside the foul pole and Segura's one-out shot to left. Bohm's RBI single in the fifth made it a three-run game.

Garrett gave up four runs - three earned - on eight hits in 4 2/3 innings with three strikeouts and no walks.

Phillies interim manager Rob Thomson said star slugger Bryce Harper has cut back on his throwing regimen. Harper, exclusively a designated hitter since injuring his right elbow in April, is expected back at some point in September after breaking his left thumb in late June.

"We're just going to back off a minute and concentrate on the hitting," Thomson said.

The Phillies offense, especially of late, has been doing well without the 2021 NL MVP in the middle of the lineup. Philadelphia improved to 23-13 since Harper last played.

Charles Leblanc extended his on-base streak to start his career to nine consecutive games with a first-inning single for Miami. He is batting .419 during the stretch.

RHP Noah Syndergaard (6-8, 4.02 ERA) makes his second start for Philadelphia since being acquired at the trade deadline last week from the Angels. He will face Marlins ace Sandy Alcantara (10-4, 1.88) on Wednesday night.