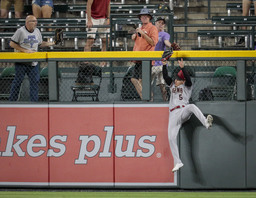 Gallen (8-2) struck out six and extended his shutout streak to 14 innings over his past two starts. He gave up three hits in seven scoreless innings against Pittsburgh on Monday.

"I was able to reset over the All-Star break. Nothing I really changed that much, just some things that we picked up on, little things," Gallen said. "It was hard to get nitpicky. Outside of the last couple outings going into the All-Star break I was having a pretty decent year, numbers-wise and stuff-wise."

Alek Thomas made a great catch on the last play of the game to preserve the shutout, leaping and reaching over the wall in center to take away a likely two-run homer by C.J. Cron.

Thomas, who entered in the seventh inning, worked on over-the-wall grabs during batting practice earlier before the game.

"I wasn't playing today so I was just practicing robbing home runs," he said. "Usually on the off days that I get, I try to do that. It's funny that coincidentally I get a ball that's robbable and I end up robbing him."

Rivera hit solo shots of 408 feet in the first inning and 403 feet in the third off Jose Urena (1-4), his ninth and 10th homers of the season. He walked in the fifth, struck out in the seventh and grounded out in the ninth.

"When I came up for my third at-bat my objective was to get a good at-bat. If the homer happened to come it's in God's hands, it's in my hands and so be it if it came," Rivera said through a translator.

Rivera is hitting .391 and has a hit in six straight games since Arizona acquired him from Kansas City at the trade deadline.

Josh Rojas had three hits, including a homer off Urena in the fifth and an RBI single in the ninth.

Daulton Varsho made it 5-0 in the eighth when he tripled into the right-field corner and scored when Charlie Blackmon misplayed it for an error.

Arizona manager Torey Lovullo was away from the team to attend the memorial service for Nicole Hazen, the wife of general manager Mike Hazen, who died this week of glioblastoma. Bench coach Jeff Banister served as acting manager.

"I know our guys had a lot of energy tonight," Banister said. "A lot of thoughts with Mike and his family, and with Torey not being able to be here and being where it needed to be."

Lovullo will rejoin the team in Denver for Sunday's game.