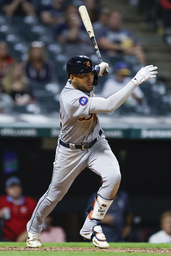 CLEVELAND (AP) Jonathan Schoop and rookie Kerry Carpenter hit back-to-back homers in the sixth inning, and the Detroit Tigers rallied for a 7-5 win over the Cleveland Guardians in the second game of a doubleheader on Monday night, snapping an eight-game losing streak.

All-Star Andres Gimenez belted a go-ahead, three-run homer in the seventh inning of the opener, a 4-1 win for AL Central-leading Cleveland. Gimenez added a two-run homer in the nightcap, finishing with four hits and five RBIs on the day.

The Guardians are 8-2 since Aug. 6 and lead the Twins and White Sox by two games in the division. Detroit, which fired general manager Al Avila last week, has lost 11 of its last 13 and is 3-14 since July 30.

"It's really cool to be part of this win and I hope it continues," Carpenter said.

Schoop gave the Tigers a 4-3 lead in the nightcap when he launched a changeup from Eli Morgan (4-3) over the wall in left. Detroit had trailed 3-1 after four innings.

Carpenter followed with his first homer in the majors, giving him 31 on the season between Detroit, Triple-A Toledo and Double-A Erie. He went 3 for 4 with three runs scored.

"The home run definitely loosened me up a little bit," Carpenter said. "It was key. The celebration in the clubhouse afterward got a little crazy, but it was worth it because we got the win."

Tucker Barnhart and Victor Reyes each had three hits and drove in two runs for the Tigers, who totaled 15 hits against five pitchers.

Detroit starter Bryan Garcia (1-0) surrendered three runs in six innings, including homers to Gimenez and Luke Maile. Gregory Soto allowed one run in the ninth but picked up his 21st save.

"The first homer to Gimenez was not a pitch I feel very bad about," Garcia said. "It was a changeup down and he went and got it."

"Honestly, I learned that I can compete, like I belong here," Curry said. "Obviously, I've got to work out little minor things with pitching, but it's still the same game."

In the opener, Gimenez connected off Andrew Chafin with two outs in the seventh, scoring Myles Straw and Amed Rosario to break a 1-all tie. Tigers reliever Will Vest (3-3) was charged with two runs and the loss.

"I just tried to stay focused and get a good pitch to hit," Gimenez said. "I recognized the slider soon enough."

James Karinchak (1-0) worked a scoreless seventh and Emmanuel Clase pitched a perfect ninth for his 27th save. Cleveland did not allow a hit after the third.

"Everybody pitched good and it was a good day to pitch," Guardians manager Terry Francona said. "There were some balls hit on both sides that were pretty good, but didn't leave the ballpark because of the wind."

Cleveland right-hander Aaron Civale struck out a season-high 10 batters over six innings, allowing one run in his second start since returning from a sprained right wrist.

"If the starters keep the game close, there is no thought about not winning the game," Civale said. "And it's been like that for a while."

The doubleheader was caused by the postponement of a July 17 game because of rain.

The Guardians have played an MLB-high 10 doubleheaders, their most in a season since 1985. Detroit has the second-most twinbills with eight.

Guardians hitters have the fewest strikeouts in the majors and rank third in stolen bases but are in the bottom half of the league in on-base percentage and slugging percentage.

"Cleveland is an elite contact team with speed, which is what makes them dangerous," Hinch said. "It's their one-through-nine presence, as opposed to first-to-third plays. They have more singles than most teams, so you know they're going to use their speed."

Tigers: OF Austin Meadows (bilateral Achilles strain) will play back-to-back games for Triple-A Toledo and could be activated this weekend. Meadows, who has been on the injured list since June 17, batted .188 in his first four games with the Mud Hens.

Guardians: 1B Josh Naylor (right ankle strain) exited the second game after fielding a sharp grounder in the third inning. It is the same ankle that he fractured, dislocated and tore ligaments in a horrific outfield collision at Minnesota on June 27, 2021.