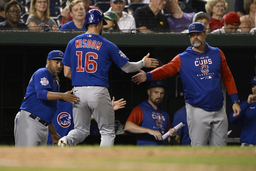 WASHINGTON (AP) Patrick Wisdom drove in the go-ahead run in the 11th inning, and the Chicago Cubs beat the Washington Nationals 7-5 on Tuesday night after losing a 4-0 lead.

Wisdom led off the inning with a double down the left-field line against Victor Arano (1-1), scoring automatic runner Willson Contreras. Wisdom then went to third on a wild pitch and scored on Seiya Suzuki's single.

"Sometimes you can get deflated on the back end of having a four-run lead and the team clawing back, and the guys just kept having good at-bats and putting pressure on the defense," Cubs manager David Ross said. "We made some mistakes in there and still ended up coming out with a win."

Brandon Hughes (2-1) pitched the 10th for Chicago and Mark Leiter Jr. worked the 11th for his first save.

Contreras gave the Cubs a 5-4 lead with a sacrifice fly in the 10th, but Nationals prospect CJ Abrams, called up Monday from Triple-A Rochester, singled home Alex Call in the bottom half for his first hit with Washington. Abrams was acquired in the trade that sent Juan Soto and Josh Bell to San Diego.

Contreras got into an argument with a fan as he returned to the bench after his sacrifice fly. The fan was escorted out by Nationals Park security.

"What he said, he got under my skin even though he was a Latino guy. We're speaking the same language so I know what he means," said Contreras, who declined to reveal what was said. "Somebody try to mess up my family they're gonna (have to go) over me first. But whatever he said, it wasn't healthy. It wasn't right."

Luke Voit and Lane Thomas clubbed solo homers off Chicago's Rowan Wick in the eighth inning to tie it at 4.

Franmil Reyes homered and singled for the Cubs.

Patrick Corbin allowed four runs on six hits over six innings for Washington. He had been skipped the last time through the rotation after pitching to a 25.41 ERA over three starts, two of which saw him chased in the first inning.

"Pretty good," Corbin said of his outing. "I felt good out there. If anything I think just getting a little time away from it. I got to throw a couple of bullpens. Maybe just a couple of mistakes but overall I made some quality pitches."

Cesar Hernandez had two doubles and a single, and rookie outfielder Joey Meneses extended his hitting streak to 10 games for the Nationals.

Ildemaro Vargas's RBI single in the seventh pulled Washington within 4-2.

The Cubs got two in the fourth on RBI hits by Nico Hoerner and P.J. Higgins to make it 3-0. Reyes' homer made it 4-0 in the sixth.

Reyes has hit safely in each of his six games since being claimed off waivers. Over that span he's hitting .346 (9 for 26) with two homers, five RBIs, three runs scored and a 1.080 OPS.

Cubs: OF Ian Happ had a scheduled night off but entered as a pinch-hitter in the eighth.

Nationals: C Keibert Ruiz, who was struck on the mask by two foul tips and later fouled a pitch off his right knee during Monday's game, was not in the starting lineup, but entered as a pinch-hitter in the seventh.

Nationals: RHP Cory Abbott (0-2, 5.94) makes his first start against his former team on Wednesday. He pitched seven games for the Cubs in 2021, including one start.