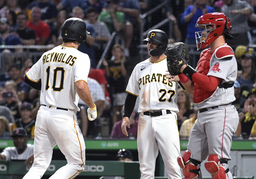 The Pirates avoided a three-game sweep and sent Boston back to one game under .500 at 59-60. The Red Sox are five games behind Toronto for the third and final AL wild-card spot.

"We're not going to win every game," Boston manager Alex Cora said. "It's going to happen. We're disappointed. We hate losing, but we took two out of three. Now, we have Baltimore, we've got Tampa and Toronto, right? Now, you've got to win series. To gain ground, these other teams, they're ahead of us."

Reynolds hit a pair of two-run homers. He connected in the first, and his drive in the fifth was the 3,000th home run at PNC Park since it opened in 2001.

"I didn't know about it, but it's pretty crazy just to be a little part of that history," Reynolds said. "They come in bunches. I guess we're in a bunch right now. Got some good pitches and, luckily, didn't miss them."

Reynolds and Kevin Newman each had three hits and scored three times.

Brubaker (3-10) allowed two hits, walked none and struck out seven. He gave up a leadoff single in the second to Alex Verdugo, who was caught stealing, and single to Xander Bogaerts with one out in the seventh.

The right-hander was removed on 84 pitches, partially because of a blister that began to form in the sixth inning. It isn't expected to keep Brubaker from making his next start.

"Just the idea of coming out, attacking the zone," Brubaker said on his focus. "Quick first inning and just kept rolling with the momentum and tempo that I was having on the mound. ... It's really just pace and it's momentum, just with your body, how your body is rolling out there on the mound. It's a lot easier when you get it from pitch one to continue it throughout the game."

Reynolds put Pittsburgh ahead 2-0 in the first with a drive off Josh Winckowski (5-6) over the wall in right field. After Newman singled in the fifth, Reynolds hit his team-leading 20th home run for a 6-0 lead.

It was the third multi-homer game of Reynolds' major league career and second this season. He has four home runs in his past four games.

"It was pretty good swings today," Pirates manager Derek Shelton said. "The first one, he got really well. Then the second one on the 3-0 pitch. It's a big lift when that happens."

Winckowski gave up each of Reynolds' home runs and a double that Ben Gamel sent over a leaping Tommy Pham in left field, scoring Newman and Reynolds with two outs in the third. He got through five innings, allowing six runs on seven hits.

"I definitely walked the tightrope with most guys, I feel like," Winckowski said. "My miss rate, or whatever it is, is definitely lower. So, guys put the ball in play on me and that amplifies hits and other things. When home runs do happen, it tends to be not solo home runs. So, it's definitely something I'm working on."

Pham got Boston on the board with an infield single off Zach Thompson in the eighth before Bobby Dalbec scored on a sacrifice fly, cutting the deficit to 8-2. Manny Banuelos struck out Verdugo on a 3-2 curveball with the bases loaded to end the inning.

Pirates: C Tyler Heineman had an RBI single in the sixth, extending Pittsburgh's lead to 8-0, in his first game since being reinstated from the 10-day injured list on Wednesday. He had been out with right groin discomfort since Aug. 3.

Red Sox: RHP Kutter Crawford (3-4, 4.18 ERA) will start Friday to begin a three-game series at Baltimore. He has allowed two runs or fewer in three of his past four starts.

Pirates: RHP Bryse Wilson (2-7, 5.93) will take the mound Friday for the first of a three-game set against the Cincinnati Reds. He has allowed more than three earned runs once in seven starts since giving up seven in back-to-back outings on May 22 and June 14.