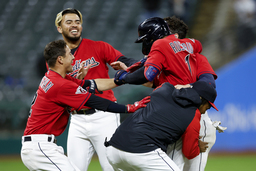 CLEVELAND (AP) Pinch-hitter Amed Rosario had a bases-loaded single in the 10th inning to give the Cleveland Guardians a 2-1 victory over the Tampa Bay Rays on Wednesday night.

Rosario, who wasn't in the starting lineup as manager Terry Francona rests his regulars after wrapping up the the AL Central, batted for Luke Maile, He lined the first pitch over the head of right fielder Manuel Margot to score Oscar Gonzalez from third base.

The game that was delayed for 1 hour, 3 minutes in the seventh inning by rain wasn't a total washout for the Rays.

Tampa Bay's magic number to wrap up a wild-card spot dropped to two with Baltimore losing to Boston. Staff ace Tyler Glasnow allowed one run in three innings in his first appearance in over a year following Tommy John surgery.

The latest win was Cleveland's 28th in its final at-bat, a club record that surpasses the 1995 team that had 27 last at-bat wins.

Francona told reporters after the game that Rosario wasn't pleased when informed he wouldn't be in the lineup.

"Should have seen the look when we first told him," Francona said. "We're trying to help. I mean, the guy plays every day. But man, pretty good pinch-hitter."

Guardians rookie Gabriel Arias, who hit his first major league home run in the third, had the sacrifice bunt in the winning rally.

"It feels incredible," Arias said through a translator about his contribution. "It feels really great when you get that result."

Glasnow's return will give the Rays another option in the postseason. The right-hander credited the routine he developed while rehabbing from surgery for getting back on the mound.

"I felt normal," Glasnow said. "It was definitely a nice moment to be out there, be healthy. Everything felt really good."

Glasnow pitched for the Rays for the first time since June 14, 2021. The right-hander threw 50 pitches and reached the high 90s several times. He struck out three, allowed two hits and walked a batter.

Rays manager Kevin Cash said he knew Glasnow felt like his usual self when the pitcher lobbied to go out for the fourth inning.

"Even when he got hurt and had the surgery, we were all confident that he wouldn't be out-worked by anybody," Cash said. "That stayed true. We know how talented he is and what he can add to our team."

Rain started falling heavily when the seventh inning began and the tarp was called for with the bases loaded and one out. Several bags of drying agent were used because of standing water on the infield before the game finally resumed.

The Guardians, who won the AL Central on Sunday, are 8-1 in their last nine. The series opener also went extra innings with the Rays winning 6-5 in 11 after a rain delay of 23 minutes.

Cleveland starter Triston McKenzie continued his September dominance, allowing one run and striking out six in six innings. The right-hander is 2-0 this month with a 2.14 ERA in five starts. He's struck out 37 in 33 2/3 innings.

Arias' homer landed in the left-field bleachers, but bounced back on the field. The ballboy retrieved the ball and threw it to left fielder Randy Arozarena, who tossed it to a fan in the bleachers.

The ball was eventually retrieved for Arias, one of 16 Cleveland players to debut in the majors this season.

While the Rays are battling for a postseason spot, Cash admitted the team's thoughts are on the impact Hurricane Ian is having on Florida.

"It's been a challenge today," he said. "We experienced it a couple of years ago. This time certainly feels like a more impactful storm, that's covering our spring training area right now (Port Charlotte). There are a lot of families - not just Rays' families but the entire Florida community that's going through it right now."

Rays: Yandy Diaz (left shoulder) was scratched after being in the original starting lineup batting leadoff and playing first base because he still felt soreness. Diaz was used as a pinch-hitter Tuesday, his first appearance since Sept. 19.

Guardians: Gimenez returned after not playing Sunday and Tuesday.