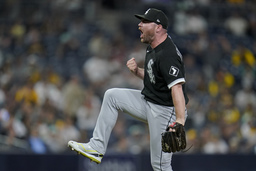 Darvish was pushed back a day to give him extra rest with an eye toward pitching in the NL wild-card round, but the Padres lost their third straight game. With Milwaukee's win over Miami, their magic number remained at three for clinching a wild-card berth.

The Padres' lead over Philadelphia for the No. 2 wild card was cut to 1 1/2 games and they're just two games ahead of the Brewers with five to play.

The Padres struck out 15 times.

The White Sox, eliminated from the playoff chase a year after winning the AL Central, won for the second straight day after losing eight straight.

Darvish (16-8), who was trying for his career-best 17th win, had his six-start winning streak snapped. He allowed three runs and eight hits in six innings, struck out six and walked one.

"Not my best," Darvish said. "I don't think I was at my best obviously, but just managed to get six innings, so I think that part is a plus."

Darvish's next start will be either in the regular-season finale on Wednesday at home against the San Francisco Giants or in the wild-card opener.

Darvish allowed consecutive singles opening the second before retiring the side.

He wasn't as lucky in the fourth, when he allowed three hits in an inning for the first time in six starts to allow the White Sox to take the lead. Jimenez hit a leadoff homer to left, his 16th. Gavin Sheets doubled to center and scored the go-ahead run on Yoan Moncada's single to right.

"It's almost an upset that you don't get the type of outing we've seen every time," manager Bob Melvin said. "When you only score one run and they score three ... his breaking stuff not as sharp as it's been this year but he gives us six innings, throws over 100 pitches, three runs, puts us in position to win."

The White Sox made it 3-1 in the sixth when Moncada hit a one-out double to right and scored on Andrew Vaughn's single.

White Sox rookie Davis Martin (3-5) held San Diego to one run and six hits in 5 2/3 innings, struck out a career-best eight and walked none.

Liam Hendricks pitched a perfect ninth for his 35th save.

San Diego's Brandon Drury was knocked down when he was hit on the bill of his helmet by a pitch from Martin with one out in the fourth. Drury was checked by a trainer and remained in the game.

"It didn't sound good when it happened and we're going to be very careful in that situation, but he felt OK as the game went along," Melvin said. "He didn't feel any symptoms. "I think we caught a break there."

Drury was placed on the seven-day concussion list on Sept. 5 after being hit on the face flap of his helmet by a pitch from Dustin May of the Los Angeles Dodgers on Sept. 2.

Drury doubled with one out in the second and scored on Josh Bell's single.

Jurickson Profar was easily thrown out trying to score from first on Juan Soto's double to end the fifth.

"We're not scoring a lot of runs right now so we're trying to push a run across," Melvin said.