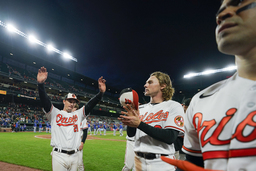 BALTIMORE (AP) As the Toronto Blue Jays casually celebrated their victory on the field, the fans at Camden Yards weren't quite done with Baltimore's feel-good season.

They gave the Orioles a standing ovation, and eventually the players came out of the dugout to acknowledge it.

"I thought it was an extremely cool moment, but thank you to all the fans for the support this year," manager Brandon Hyde said. "Unfortunately we couldn't end it with a win in this last game of the year. We really appreciate how they came out this year, and we know there's an excitement about this team going forward."

The Orioles lost 5-1 to Toronto in the second game of Wednesday's doubleheader, but they did win the opener 5-4 in come-from-behind fashion. They ended the season with an 83-79 record, a 31-game improvement over 2021.

Toronto had a more modest one-game improvement to 92-70, but the Blue Jays can now focus on the postseason. They are the AL's top wild card and will host Seattle in a best-of-three series.

Otto Lopez hit a tiebreaking two-run single in the seventh inning of Wednesday's second game. Terrin Vavra hit a three-run homer in the bottom of the eighth to lift Baltimore to a win in the opener.

Lopez had three hits in the opener and two more in the second game. Both teams substituted liberally, combining to use 49 players in the twinbill. Toronto's George Springer was the only active position player who had the whole day off.

"The entire pitching staff, it kind of went according to plan, how we mapped it out," Blue Jays interim manager John Schneider said. "Came out of it healthy. Overall really good day."

With the second game tied at 1 in the seventh, Toronto put men on first and third with one out thanks to a throwing error by reliever Cionel Perez. After Bradley Zimmer stole second, Lopez's single brought home both runners.

Zimmer added a two-run single in the eighth.

Yusei Kikuchi (6-7) retired all five of his hitters to earn the win in relief for Toronto. Yennier Cano (1-1) took the loss.

The Blue Jays loaded the bases in the first and took a 1-0 lead on Danny Jansen's grounder. The Orioles tied it in the sixth on an RBI double by Kyle Stowers.

Baltimore rallied from a 4-0 deficit in the opener, thanks to Vavra's first career homer.

"Those are kind of the moments you kind of think about when you're coming up and playing this game at younger levels," Vavra said. "To be able to kind of do it in a big moment, that was pretty cool and something I'll remember forever."

"It would be nice to maybe get off the deck in the first to the fifth and then cruise in. That's what I'm hoping for once in a while," Hyde joked. "We like to make it tough, and then pitch out of jams, and then pop one late to get a win."

Lopez opened the scoring for Toronto with an RBI single in the second. After Moreno's drive to right-center made it 4-0, Austin Hays hit a two-run double in the bottom of the sixth for the Orioles.

Baltimore's Jorge Mateo led the AL in stolen bases with 35, one more than teammate Cedric Mullins.

Orioles: Baltimore could have started Jordan Lyles on normal rest Wednesday but decided to have him end his season after a career-high 32 starts.