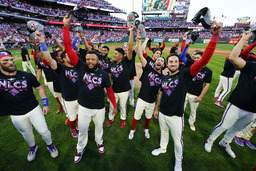 PHILADELPHIA (AP) Bryce Harper stood as still in the clubhouse as he does when he admires a home run and accepted the beer bath from bottles his Phillies teammates took delight in pouring on him.

Harper's goggles provided no defense for the waterfall of booze streaming down his cheeks.

"It's so cold! But it's so good!" slugger Rhys Hoskins barked in Harper's face.

Then it was time for the Phillies to sing: "I'm going going, back back, to Cali Cali!" they shouted in unison to the Notorious B.I.G. classic. That's right, the next stop for the Fightins is a trip West to the NLCS, as a team that looked completely lost in May suddenly looks every bit like a World Series contender in October.

Brandon Marsh hit a three-run homer and J.T. Realmuto lined an inside-the-park home run that sent Philadelphia bolting headfirst into the NL Championship Series for the first time since 2010 with an 8-3 win over the Atlanta Braves in Game 4 Saturday.

Realmuto became the first catcher to hit an inside-the-parker in postseason history and Harper punctuated the romp with a clinching home run that helped the Phillies take the NL Division Series 3-1 against the World Series champion Braves.

The Phillies will face the Padres in an all-wild card NLCS beginning Tuesday in San Diego. The Padres stunned the Dodgers, taking their NLDS matchup in four games.

"Like I told them, the goal when we leave spring training is to win the division. Until you win the division, you don't have a chance to do anything special because you never know what's going to happen, you don't know what team's going to get hot, what things have to go right for you to go deep into the postseason," Braves manager Brian Snitker said.

"And we got in. It didn't happen for us this year," he said.

Philadelphia finished third in the NL East at 87-75, a full 14 games behind the 101-win Braves this season, but is playing like a contender under manager Rob Thomson. Thomson, who had been a career coach for the Yankees and Phillies, transformed a team well out of contention at 23-29 when they fired Joe Girardi on June 3.

"Then once we hit June, the schedule kind of lightened up a little bit and we started winning, and guys started getting confidence and believing that they could win and believing that, OK, now this is the team that we thought we were. And just kept going," he said.

After a 2-0 sweep of NL Central champion St. Louis in MLB's newly created wild-card round, the Phillies used a dose of Marsh Madness to keep the party rolling in October.

Heck, call it Mash Madness, as the Phillies turned Citizens Bank Park into a cozy home bandbox for the second straight game -- and with another fired-up, towel-waving crowd along for every long ball.

After Hoskins spiked his bat on a three-run shot in a Game 3 win, it was Marsh's turn in the second inning to hammer his own three-run homer in Game 4.

Braves starter Charlie Morton was hit on his pitching elbow by Alec Bohm's single traveling 71.9 mph to lead off the inning. After being checked, Morton allowed a single to Jean Segura and hung a 2-2 curveball that the No. 9 hitter Marsh launched deep into the right field seats for a 3-0 lead.

The 24-year-old Marsh is known as much for his stringy hair and ZZ Top-esque beard as he is for being one of the top young players on the Phillies. Marsh, who also doubled in the fourth, was acquired from the Los Angeles Angels in August just ahead of this season's trade deadline. Phillies President Dave Dombrowski swung another deadline deal with the Angels that got them Game 4 starter Noah Syndergaard, also known for his long locks.

Hey, it will be easy for the Phillies to let their hair down and party.

Reliever Brad Hand was one of six Philadelphia pitchers and got the win.

Syndergaard, bumped from the rotation at the end of the season, wasn't asked by Thomson to do much other than keep the Phillies in the game. Maybe go unscathed once around the order . Syndergaard delivered with three strikeouts in three innings in a brief throwback to his commanding "Thor" days with the New York Mets.

Orlando Arcia hit a solo shot off him in the third to make it 3-1.

Realmuto then hustled his way into postseason history.

He connected to lead off the third inning against reliever Collin McHugh. The ball hit the angled portion of the wall beyond the reach of center fielder Michael Harris II, and the carom rolled along the warning track toward right-center. Ronald Acuna Jr. stood in right field watching the play, and didn't start running toward the ball until Realmuto was well past first base. Realmuto, who runs extremely well for a catcher, made a headfirst slide into the plate, well ahead of the relay.

With that, it was bedlam inside the park, as a sellout crowd of 45,660 was deliriously cheering, every sense tingling that there wasn't going to be a Game 5.

Nope. Just Game 3 of the NLCS back in Philly on Friday.

Harper hit a solo homer in the eighth, the second of the series for the reigning NL MVP.

It seemed fitting the trio of Phillies sluggers that form the heart of the franchise put the game away in the sixth. Hoskins-Realmuto-Harper all had RBI singles that made it 7-2 and a series clinch a mere formality.

The Phillies trotted out 2008 World Series champion Pat Burrell to throw the first pitch after his teammate from '08 Shane Victorino did the same before Game 3.

The Phillies' run of five straight postseason appearances -- that included the 2009 NL pennant and a loss in the 2010 NLCS to San Francisco -- stretched from 2007 to 2011 until the franchise was saddled with so many dry years without hope.

They no longer have to look at Burrell, Victorino other members of that run as the only reminders of postseason stars -- Harper, Hoskins, Realmuto, Marsh have carved their own October marks, with at least one more series ahead.

Morton walked out to the mound for the start of the third inning but could not get loose. He was replaced by McHugh. Morton entered 5-0 with a 0.73 ERA in five career elimination games, four starts.

Phillies RHP David Robertson hoped he could return to the roster for the NLCS. The reliever injured his right calf jumping to celebrate Harper's home run in their clinching wild-card victory at St. Louis. The 37-year-old had a resurgent season with the Cubs and Phillies, going 4-3 with a 2.40 ERA, including a 2.70 ERA in 22 appearances after a midseason trade. Robertson called the injury "embarrassing."