Kluber throws off mound for 1st time since breaking arm 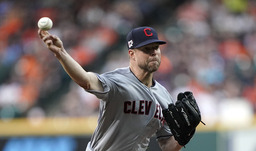 CLEVELAND (AP) The Cleveland Indians say pitcher Corey Kluber threw a successful bullpen session at Progressive Field, the right-hander's first time throwing from a mound since fracturing his right forearm on May 1.

The team said the two-time Cy Young Award winner fired 20 fastballs, as scheduled, before Cleveland's game against Detroit on Wednesday.

Kluber remains on the 60-day injured list and is several weeks away from potentially beginning a minor league rehabilitation assignment.

Kluber was struck on his pitching forearm by a line drive off the bat of Miami's Brian Anderson at Marlins Park. The 33-year-old spent several weeks in a hard cast, and has continued to run and work on his conditioning.