Martinez declines to opt out of contract, stays with Red Sox 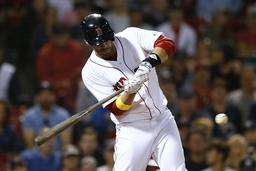 BOSTON (AP) Red Sox designated hitter J.D. Martinez has decided to stay in Boston instead of becoming a free agent, declining an option that would have voided the last three years of the contract he signed after teams had reported to spring training in 2018.

The move saves the Red Sox from shopping for a new DH but also complicates their plan to cut salaries and get under baseball's luxury tax threshold. The team's payroll for the tax was a big league-high $243 million this year and Boston has made it a goal to get under the $208 million threshold for next season while also signing 2018 AL MVP Mookie Betts to a long-term deal.

Boston signed Martinez after a long negotiation in one of baseball's slowest-moving free agent markets since the collusion scandal of the 1980s. After hitting the fewest homers in the AL in 2017, the year after David Ortiz retired, the team needed a DH. And Martinez was still looking for a job as spring training began.

To seal the $110 million, five-year deal, the Red Sox gave him the right to opt out after the second or third years if he outperformed it, and by most accounts he did.

Now, new Red Sox chief baseball officer Chaim Bloom must try to find a way to sign Betts, who is eligible for arbitration and expected to command a one-year salary near $30 million, to a deal worthy of a franchise player without busting the team's budget.