Andrus stays with Rangers, passing 2nd chance to opt out 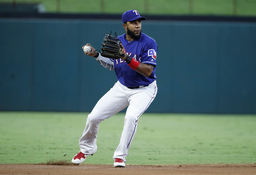 ARLINGTON, Texas (AP) Elvis Andrus is staying with the Rangers after the shortstop passed up on a second chance to opt out of his contract and become a free agent.

Andrus has $43 million and three years left on his contract in Texas.

He just completed his 11th season with the Rangers. The 31-year-old shortstop is the team's longest-tenured player, and the only player remaining from their only two World Series appearances in 2010 and 2011.

He also had the opportunity to opt out after the 2018 season, when he was limited to 97 games because of a fractured right elbow. The two potential opt-outs were part of the $120 million, eight-year deal he signed before the 2015 season.

Tim Federowicz elected to become a free agent after the Rangers assigned the catcher outright to Triple-A Nashville.