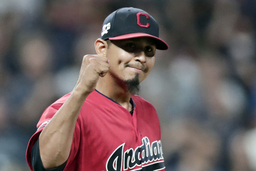 Major League Baseball made the announcement on Wednesday.

Carrasco won the American League award. He was diagnosed with chronic myeloid leukemia in early June, missed three months while undergoing treatment and returned to the Indian in a relief role in September.

In October, the 32-year-old right-hander from Venezuela won the Roberto Clemente Award presented for the character he's shown on and off the field.

Donaldson won the National League honor. He played only 52 games for Toronto and Cleveland in 2018 because of injuries, but bounced back for a big year with the Braves.

The awards were chosen by the 30 team beat writers for MLB.com.