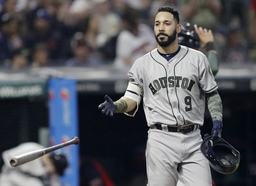 FORT MYERS, Fla. (AP) Marwin Gonzalez became the first batter from the 2017 Houston Astros team that won the World Series to publicly apologize for his role in the sign-stealing scandal, expressing regret Tuesday after reporting to spring training with the Minnesota Twins.

"I'm remorseful for everything that happened in 2017, for everything that we did as a group, and for the players that were affected directly by us by doing this and some other things," Gonzalez said. He later added: "I wish that we could take it back, but there's nothing we can do now."

Major League Baseball's investigation into the allegation first made publicly by former Astros pitcher Mike Fiers resulted in one-season suspensions for manager AJ Hinch and general manager Jeff Luhnow, a $5 million fine and the loss of Houston's first- and second-round draft picks in 2020 and 2021. Hinch and Luhnow were fired by the Astros, and Boston manager Alex Cora and New York Mets manager Carlos Beltran also lost their jobs for their involvement in the sign-sealing system for the Astros, Cora was bench coach and Beltran was a player on the 2017 team.

Former Astros pitcher Charlie Morton, now with the Tampa Bay Rays, said Saturday he regretted not making an effort to stop the sign-stealing at the time. The current Astros have mostly avoided commenting since the results were released from MLB's probe into the elaborate method they used to try to tip off teammates as to what type of pitch was coming.

Gonzalez, a multi-positional player starting his second season of a $21 million, two-year contract with the Twins, had a career year in 2017 with the Astros. He hit .303 with 23 home runs and 90 RBIs in 134 games, with an OPS (.907) that was 148 points better than any other season of his eight-year career.

"I can't control how people think of me. I can control how hard I work, and that's the way that I prepare for this season," Gonzalez said at Minnesota's training facility in Fort Myers, Florida.

As for whether the Astros would have won the title without the assistance of the sign-stealing system, featuring outfield video cameras and trash can banging?

"You're never going to know. That was a great team. Great guys, too. Beside everything that happened, I know for a fact that they're great guys, but it's hard to answer that question," Gonzalez said.

The Twins have two new pitchers, Rich Hill and Kenta Maeda, who were on the Los Angeles Dodgers team that lost to the Astros in the 2017 World Series. Gonzalez said he planned to speak to them but downplayed the lasting effect of his connection to the scandal.

"I'm sure we're going to have a great relationship," Gonzalez said.

The players still with the Astros will have a harder time escaping the backlash around baseball.

"They're going to get booed. Hopefully they can get through that," Gonzalez said. "I know they have a great team, too, and I hope to face them in the playoffs."