Dodgers' Bellinger glad to put offseason drama behind him 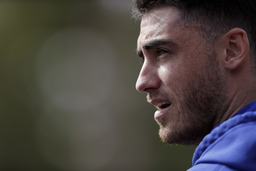 SCOTTSDALE, Ariz. (AP) This wasn't what Cody Bellinger had in mind for getting his feet wet to start 2020.

The Los Angeles Dodgers MVP was in the lineup for his team's spring training opener Saturday, facing the San Francisco Giants in a game delayed 2 1/2 hours due to rain in the Phoenix area.

Manager Dave Roberts admitted he was nervous to start Bellinger in conditions that caused all but one other Cactus League game to get canceled, but Bellinger came out just fine. He singled and scored on Enrique Hernandez's homer, batted three times and played center field in the Dodgers' 10-4 win.

Bellinger said there were minor issues only in left field, where the water from the tarp was emptied.

"The warning track was really wet (before the game), but they did a good job of fixing it up," Bellinger said of the Giants' grounds crew. "It turned out fine."

Bellinger was certainly relieved to get back on the field after a bizarre offseason.

The Dodgers first dealt with a stunning, season-ending, extra-inning loss to the World Series champion Washington Nationals, then learned of the details involved in the Houston Astros' 2017 title they earned by beating the Dodgers in seven games.

"Definitely, 100%," Bellinger said. "It felt good to be out there and get that first hit out of the way."

The Astros apologies have not been deemed sufficient by other MLB players. Bellinger and Dodger third baseman Justin Turner were particularly critical of both the Astros and Commissioner Rob Manfred after comments he made about the Series trophy just being "a piece of metal."

The Dodgers fortified their already strong lineup with the addition of 2018 AL MVP Mookie Betts. Bellinger is expected to play center field with Betts staying in right, where he spent most of his time with the Boston Red Sox.

Betts did not play Saturday, but Roberts said he will be in the lineup Sunday when the Dodgers host the Chicago Cubs at Camelback Ranch. Roberts also said the rain pushed Clayton Kershaw's work to Sunday. He had been scheduled to pitch a live batting practice session on Saturday.