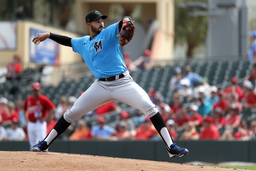 JUPITER, Fla. (AP) Adam Conley has pitched in the Miami Marlins’ organization since 2011, which gives him a unique perspective on the quality of their rotation through a decade of losing.

“The depth is noticeably improved,” Conley says. “Now you can't pitch for the Marlins with a 6.00 ERA. Someone will come to get your job.”

Conley had a 6.17 ERA in 20 starts for Miami in 2017, and if he makes the team this spring, it will be as a reliever. There are more than a dozen young arms contending for the rotation this season, and the Marlins

thanks in part to their emerging starters.

“The pitching is ahead of the position player grouping,” president of baseball operations Michael Hill says. “You have talented young pitchers who are continuing to get better. That’s how we get better. And that’s how we make it to October.”

The Marlins haven't played in the postseason since 2003 and likely won't get there this year. But more than three years after the death of precocious ace José Fernández in a boating accident devastated the franchise, the Marlins believe they have the arms to build a winning foundation.

No one is hailed as the next José, although there's considerable hype regarding right-hander Sixto Sanchez, the organization's No. 1 prospect.

“Everybody loves to say `Sixto’ - it's like a one-word guy already,” manager Don Mattingly says with a smile.

Sanchez, a Dominican whose arsenal includes a 100 mph fastball, was acquired in the trade that sent All-Star catcher J.T. Realmuto to the Philadelphia Phillies a year ago. Sanchez is only 21 but might join the rotation at some point this season.

While he's projected as a potential No. 1 starter, there's also strength in numbers for the Marlins. Their abundance of young pitching is largely a function of Derek Jeter's efforts to rebuild the farm system after his group bought the team in 2017.

Sandy Alcantara, Caleb Smith and Pablo López are expected to be in the rotation to start the season. José Ureña, Elieser Hernández, Robert Dugger and Jordan Yamamoto, who all started games last season, are contending for the other two spots.

Also in spring training camp is a highly regarded group of prospects that includes Sanchez, Edward Cabrera, Trevor Rogers, Braxton Garrett, Jorge Guzman, Jordan Holloway and Nick Neidert. Most of them are considered candidates to crack the rotation sometime this year, creating friendly competition within the group.

“We're brothers,” says Cabrera, another Dominican who flirts with 100 mph.

Francisco Cervelli, a veteran catcher and Marlins newcomer, is among those impressed by what he has seen in camp.

“The talent is great,” Cervelli says. “They’re just green. Our job is to get everything out of them, because the tools are there.”

The prospects won't be rushed, because the Marlins are coming off a 105-loss season and are still at least a year away from contending. But many are in their first big league camp, and how they pitch in March exhibition games will help determine their timetable for reaching the majors.

“It's going to be a lot of fun to watch,” Hill says. “They haven’t played above Double-A, but they have ability, size, arm strength and a pitch repertoire that allows them to be successful. I’m excited for all those guys, and to see what they’re capable of doing. We’re going to put it in their hands."