With athletic family all around, DeShields fits into Indians 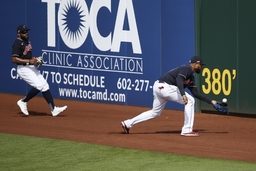 GOODYEAR, Ariz. (AP) Dad, the elder Delino DeShields, is working less than 100 yards away, behind a fence dividing Cleveland's training complex from the Cincinnati Reds facility. Sister Diamond DeShields is just a phone call away.

Together, they help Delino DeShields strive to meet his latest challenge: making an impact in his first season with the Indians.

He talks baseball and life with Dad and mental outlook with his sister, a rising WNBA star.

"Baseball is a big part of our lives, so it is something we both bond over," DeShields said of his father, a 13-year MLB veteran who is in his second year as the first base coach of the Reds.

DeShields relishes discussions with his sister as well. The former Tennessee standout earned all-WNBA honors last season for the Chicago Sky and was an All-Rookie selection in 2018.

"She has a killer mindset," Delino proudly said. "I thought she could have been a professional in high school, just the way she carried herself and the way she led her team. She says no one is better than her -- from birth."

"We talk every now and then about mentality stuff, but for the most part she's got it down pat," he said.

Along with hard-throwing reliever Emmanuel Clase, who is sidelined by an upper back injury, DeShields came from Texas to Cleveland in a Dec. 15 trade for two-time AL Cy Young winner Corey Kluber.

DeShields relies on speed and quickness to run down balls in gaps, and extraordinary leaping ability to track drives at the wall and dive to snag line drives.

At the plate, DeShields is a career .246 hitter with a .326 on-base percentage. In spring training, he's hitting .211 with one extra-base hit in eight games after going 0 for 3 Sunday against the Colorado Rockies.

"I'm focused on hitting the ball hard, getting my strikeout percentage down and just using the big part of the field, just keeping the ball between the lines," DeShields said.

For his five-year MLB career, DeShields has struck 447 times and drawn 193 walks.

Hitting coach Ty Van Burkleo is among the Indians' personnel DeShields knew before he was traded.

Detailed swing work is part of his DNA, along with dealing with injuries. The 27-year-old DeShields dealt with one of the most dreaded in baseball -- he was hit in the face with a fastball in 2014 as a minor leaguer with the Astros.

Indians outfielder Greg Allen grew up aware of the older DeShields, but he knew more about his new teammate.

"I definitely was familiar with him, the type of player that he is, and the type of outfielder that he is, what he brings to a ballclub," Allen said. "It has been great having the chance to be around him these past few weeks, getting to know him and be in the outfield with him."

Manager Terry Francona likes what he's seen from the newcomer, saying DeShields is "playing center field like we thought he would."

NOTES: RHP Mike Clevinger, who underwent surgery on Feb. 14 to repair a partial meniscus tear in his left knee, is throwing weighted balls. "He's actually doing really well," Francona said. "They don't want to put the brakes on him, but they want to make sure that he doesn't overdo." Francona said he will have an update on the 29-year-old's recovery Monday, following Clevinger's doctor appointment.