30 MLB players sign on for The Show video game tournament 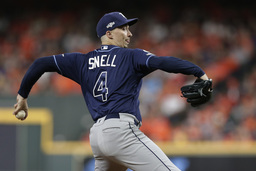 NEW YORK (AP) Blake Snell, Juan Soto and Bo Bichette are among the baseball stars switching over to PlayStation with America's pastime on hold.

Thirty big leaguers - one from each team - have signed on to play a round-robin regular season on the MLB The Show video game with the real season on hold due to the novel coronavirus.

Snell, a Cy Young Award winner with Tampa Bay, will face Cincinnati reliever Amir Garrett in the opener Friday night. That matchup will air on Snell's

and other games will be streamed via Twitch and YouTube with MLB Network host Robert Flores providing commentary.

The venture was launched Friday by Major League Baseball, the players’ association and Sony Interactive Entertainment.

“We’ll see how I do,” Gallo said. “I’m not terrible, but I don’t know not sure how good the other guys are.”

Gallo said he's had little trouble setting up a Twitch stream, but he thought MLB might be sending him equipment to upgrade his setup. His home games will take place in a virtual Globe Life Field, the Rangers new ballpark that was set to host its first game last month.

“It’s pretty cool playing there,” he said. “That field looks really nice. I actually played (teammate Willie Calhoun) online, we streamed it. We were both the Rangers playing at the Rangers’ field, at our home field. It was really cool.”

Players will complete a 29-game regular season - one three-inning contest against each team - through April. The top eight teams will qualify for the postseason, expected to mirror MLB's current format.

The NBA is running a similar esports tournament on NBA 2K featuring 16 pro players, including stars Kevin Durant and Trae Young. Those games have been airing on ESPN.

MLB, the union and Sony are contributing $175,000 to Boys & Girls Clubs of America as part of the initiative.