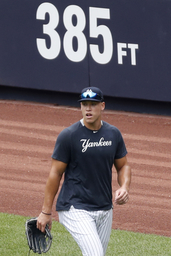 NEW YORK (AP) Yankees right fielder Aaron Judge remains slowed by his sore neck and is uncertain for Tuesday's intrasquad game, and pitcher Masahiro Tanaka remains a concern for the start of the season as he recovers from a concussion.

Judge took some swings in an indoor batting cage and worked in the weight room.

"He's got way more range of motion," manager Aaron Boone said Monday. "They've gotten a lot of that pain out of there when he turns to the side and things like that."

Judge's neck has bothered him since at least Saturday. The 2017 AL Rookie of the Year missed time due to oblique strains in 2016 and last year, a broken right wrist in 2018 and a broken rib this spring training stemming from a diving catch last September.

"It'll prove out that he's a durable guy. I do feel that way," Boone said.

Tanaka was hit on the side of his head by a line drive off the bat of Giancarlo Stanton on July 4. He has been throwing on flat ground and Boone said he had a date in mind for a bullpen session, which he did not announce. Tanaka would then have to progress to batting practice.

"Encouraged but again just also making sure we go slow and smartly with it," Boone said. "Obviously he's not going to be built up very much. I'm kind of a step at a time right now with Masa. ... Obviously with an extended roster there's a little more flexibility there at the start, too, if we have to creatively build him up at some point."

Boone finalized his decision to have Gerrit Cole pitch in Friday's intrasquad game and give the new ace five days' rest for opening night at Washington on July 23. Cole will skip the three exhibitions, Saturday at the Mets, Sunday at home against the Mets and Monday at Yankee Stadium against Philadelphia.

Utilityman Rosell Herrera has not played since Thursday because of pain in both heels, which had started to bother him in March.