Third dimension: McMahon prepares to step in for Arenado 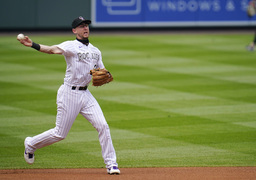 DENVER (AP) In the estimation of Ryan McMahon, Nolan Arenado may just be the best third baseman ever.

The Colorado Rockies' versatile infielder is in line to get the first crack at filling in for Arenado, an eight-time Gold Glove winner and five-time All-Star who was recently traded to St. Louis.

Although McMahon's played all over the infield for the Rockies, he grew up in California as a third baseman. He's the frontrunner to earn the job, with Brendan Rodgers, Chris Owings, Josh Fuentes (Arenado's cousin) and Colton Welker also in the mix.

"I've been getting reps over there and we'll see how it shakes out," said McMahon, a second-round pick by Colorado in the 2013 amateur draft. "But I'm definitely excited at the thought of playing third base."

McMahon has always taken an immense amount of pride in his defense - no matter the position. Last season, he split his time between first base (10 starts), second (28) and third (10). He even played a few innings at shortstop.

For being a plus-defender - manager Bud Black's description - at any spot he plays, McMahon credits being around Arenado, shortstop Trevor Story and former Rockies second baseman DJ LeMahieu, who's now with the New York Yankees.

"Those guys just go to work defensively," said McMahon, who committed 10 errors in 263 chances around the infield in 2020. "I feel like it's really rubbed off on me and kind of how I go about my daily business.

"It's fun to take away hits from the other team and feel good about helping your squad."

McMahon started eight of the nine games at third when Arenado went on the injured list late last season with a bruised left shoulder. McMahon batted .250 over that nine-game stretch - it included one start at second - with two homers and six RBIs. He made two errors in the field.

"He played well, made some really good plays," Black said.

What's more, he may have just unlocked something at the plate over those final games and without any added pressure given the team was out of the playoff chase.

"We all kind of just were like, `Hey, let's go out there, let's grind out these at-bats and play some hard-nosed baseball and finish the season strong,'" said McMahon, whose nine homers last season were second-most on the club behind Story's 11. "I was just a little bit more selective at the plate and honestly just loosened up and had a little bit more fun with it."

It's an approach he's taking into this season.

"It's got to be a mindset, because 162 games is no joke," McMahon said. "I think that's where your daily goals and your daily reminders and having a good group around you to check you back in and stuff like that, and different guys to lean on, that's when that becomes important."

Like everyone else, McMahon watches all the highlight plays Arenado has made at third with amazement.

"You've got to kind of come up with your own style when you're over there at third base," McMahon said. "I'm going to go over there and do my thing."