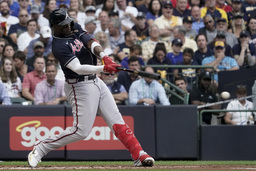 LOS ANGELES (AP) The Atlanta Braves welcomed back outfielder Jorge Soler for Game 5 of the NL Championship Series on Thursday after he was sidelined following a positive COVID-19 test.

Soler struck out as a pinch-hitter in the eighth inning of an 11-2 loss to the Los Angeles Dodgers, his first at-bat of the series.

The Braves still lead 3-2 in the best-of-seven playoff. Game 6 is Saturday in Atlanta, where the NL East champion Braves get two more chances to advance to the World Series for the first time since 1999.

Soler hit a combined .223 with 27 homers and 70 RBIs for Kansas City and Atlanta during the regular season.

"That's a great weapon off the bench," Braves manager Brian Snitker said before the game. "He's been working out on his own, so I think he's good to go."

Soler, who is vaccinated, was pulled from the lineup for Game 4 of the NL Division Series against Milwaukee last week. The Braves beat the Brewers 5-4 to clinch the best-of-five playoff.

Soler was part of the dramatic outfield makeover orchestrated by general manager Alex Anthopoulos after the Braves lost Ronald Acuna Jr. to a season-ending knee injury and Marcell Ozuna to a hand injury and legal troubles.