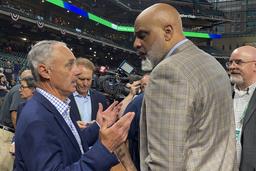 HOUSTON (AP) Baseball Commissioner Rob Manfred exchanged a handshake with players' union head Tony Clark on the field before the World Series opener and expressed optimism about reaching an agreement before the current deal expires Dec. 1 but did not detail any progress in talks that appear headed to a lockout.

"Have you ever heard me say that I'm anything but optimistic about getting an agreement?" Manfred said. "I am a believer in the process. We're meeting on a regular basis, and I'm hopeful we find a way to get an agreement by Dec. 1."

There is no evidence of progress toward an agreement, and many management officials and player agents have said they are prepared for a lockout if there is no deal when the current agreement expires.

"It's hard to characterize progress," said Manfred, who was the league's chief negotiator before becoming commissioner in 2015. "Progress is, you go in a room, you're having conversations. People are continuing to talk. It doesn't move in any measurable way that I've ever figured out, anyways, and I've done it a long time.

"The most important point is that I know our clubs are 100% committed to the idea that they want an agreement by Dec. 1."

Clark said talks have been ongoing and he's "looking to take advantage of as many days as the schedule permits throughout the course of the next five-plus weeks or so to continue that dialogue."

Manfred would not respond to questions about lingering fan anger toward the Astros, who were found by Major League Baseball to have used banned electronics to steal signs en route to the 2017 World Series title.

"We had a great Division Series, LCS. We got two teams that played really, really well. And I'm looking forward to a great World Series," he said.

When pressed, he responded: "I think the Astros winning will be a great accomplishment for the Astros. And people are going to make up their own minds about what it means."

While the Cleveland Indians are changing their name to the Guardians for 2022 and the Washington NFL team dropped Redskins in July 2020, Manfred is comfortable with Atlanta's decision to keep the Braves nickname.

While opinions of the Braves name and their use of the tomahawk chop are varied within Native American communities, the National Council of American Indians have called for the franchise to drop the name and chant.

The World Series will be played at Atlanta's Truist Park this weekend after Manfred moved the 2021 All-Star Game from Atlanta to Denver over the league's objections to sweeping changes to Georgia voting laws that critics condemned as being too restrictive.

"Atlanta played great down the stretch, did a tremendous job in the playoffs," he said. "They earned their right in the World Series, and we're looking forward to being back in Atlanta."

"We always have tried to be apolitical. Obviously, there was a notable exception this year," he added. "I think our desire is to try to avoid another exception to that general rule. We have a fan base that's diverse, has different points of view, and we'd like to keep the focus on the field in the gam."

He also admitted: "Let me say this: It's harder than it used to be."

MLB anticipates receiving data next month on experiments with tackier baseballs that are being used in the Arizona Fall League.

Manfred said to look beyond the excitement of the 2021 postseason in analyzing whether to expand the postseason beyond its current 10 teams.

"I think the expansion of the playoffs is a bigger picture issue," he said.

Expanding the designated hitter to the National League remains a bargaining topic with the players' association.

An experiment with a pitch clock in Low-A West enouraged MLB officials about it's use. The 316 nine-inning games with the clock averaged 2 hours, 41 minute, down from 3:02 for the 91 games without a clock. The clock was set at 15 seconds with bases empty and 17 seconds with runners on base, with 30 seconds between batters and 2:15 between half-innings and for pitching changes.

"Certainly encouraging," Manfred said. "Game times in the 2:40s, which is a really sort of nice number when you think about it in comparison to where we've been. I think maybe more important than that is that people that go and watch the games feel like the pace of the game, the action in the game has really been improved, that it actually alters the requirement of moving along pitching, kind of changes the game the way it's played a little bit. And that would be a useful change for us."

MLB drew 45.3 million fans this year as fans gradually were allowed to return, down from 68.5 million over 2019. Only Texas began the 2021 season at 100% capacity, with other U.S. teams reaching full capacity availability ranging from Atlanta on May 7 to Seattle on July 2. Toronto played home games at its spring training ballpark in Dunedin, Florida, and then its Triple-A ballpark in Buffalo, New York, before returning home on July 30 to the Rogers Centre, where capacity reached a maximum of about 29,000 in late September.

"Our losses will be much, much, much smaller than last year," Manfred said. "I'm not going to put a number out there right now. It's just too early to do that. But I will say this: The return of fans to the ballpark was faster and more dramatic than we had forecast going into the season."

Owners decided in September to begin providing housing for certain minor league players in the 2022 season after years of players asking for help with arrangements on salaries that routinely fall below the federal poverty line of $12,880 for individuals.