Astros 3B Bregman has wrist surgery, OK for spring training 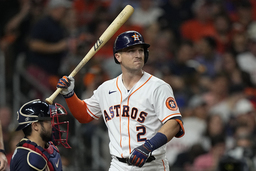 HOUSTON (AP) Astros third baseman Alex Bregman had surgery on his right wrist Monday, less than a week after ending the World Series in a prolonged slump.

The team said the two-time All-Star is expected to resume baseball activities in January and should be OK to begin spring training.

Bregman hit just .095 (2 for 21) in Houston's six-game loss to Atlanta. He was dropped from third in the batting order to seventh for the last two games.

The 27-year-old said his right hand was feeling weak during the World Series.

Bregman missed two months during the season because of a strained quadriceps. He finished at .270 with 12 homers and 55 RBIs.