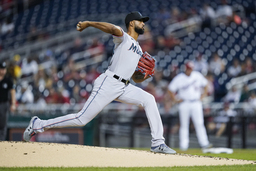 MIAMI (AP) The Miami Marlins completed the signing of right-hander Sandy Alcantara to a five-year contract on Tuesday, plus they acquired All-Star infielder Joey Wendle from the Tampa Bay Rays.

Alcantara and the Marlins agreed Sunday to a deal worth $56 million.

Alcantara would receive a one-time assignment bonus of $1 million if traded.

It's a record-setting deal for the Marlins in a couple of different ways. It's the longest and richest for in history for any first-year arbitration eligible pitcher, according to the Marlins, and the longest deal that the current team ownership group - led by Bruce Sherman and Derek Jeter - have given a player.

The 26-year-old Alcantara went 9-15 with a 3.19 ERA in 33 games, all of them starts, this past season. He was one of only three pitchers in baseball with at least 200 innings and 200 strikeouts, and had an MLB-leading six starts in which he went at least eight innings while allowing no more than one run.

He has been Miami's opening-day starter in each of the last two seasons. If he starts the opener in 2022, he will be the third Marlins pitcher to do that three times in row - joining only Josh Johnson and Josh Beckett.

Wendle was acquired in exchange for minor-league outfielder Kameron Misner. Wendle battled .265 with a career-high 11 home runs and 54 RBIs this season for the Rays.